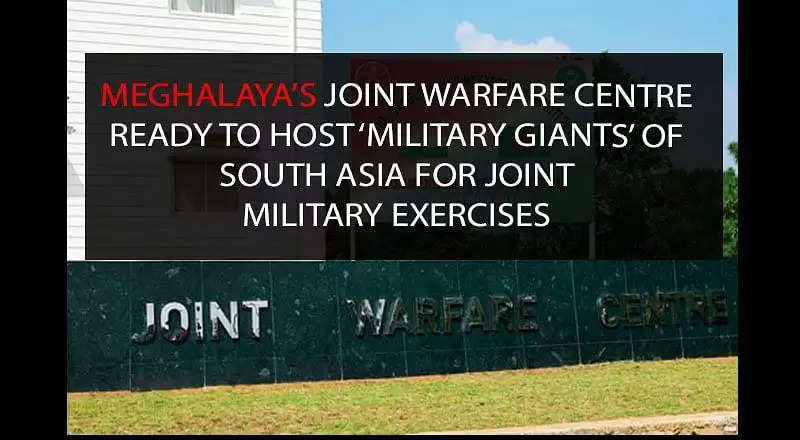 UMROI, Nov 06, 2017: Considering the military feasibility and perfect terrain for counter-insurgency exercises, Meghalaya hosted the Command Post Exercise MILAP 2017 as part of the 7th Indo-Bangladesh SAMPRITI Exercise 2017 on Monday which will continue till November 11 at the Joint Warfare Centre in Umroi, Ri Bhoi.

Exercise SAMPRITI is an Indo-Bangladesh Joint Training Exercise held alternatively in India and Bangladesh every year with an aim to enhance inter-operability between the two armies while carrying out counter insurgency/ counter terrorist operations.

It may be mentioned that this is the first time ever that Meghalaya is hosting the Indo-Bangladesh Joint Military Exercise and officials informed that the Eastern Command is planning to shift the Troops level training exercise from CIJW School in Vairengte, Mizoram to Meghalaya next year.

"Meghalaya has it all from the required practicing ground to the terrains suitable for counter-insurgency training in semi-mountainous jungle terrain with a special focus on drills and procedures followed while operating in dense jungles," officials said.

The Command Post Exercise 2017 organised by Red Horns Division saw the participation of 20 officers each from Bangladesh Army as well as the Indian Army as part of the Brigade and Battalion Command Posts over 6 days.

According to Eastern Command officials, the joint training exercise in its 7th edition will send a strong signal to the world that both India and Bangladesh understand the emerging threat of transnational terrorism and stand shoulder to shoulder united in countering this menace.

"During this exercise, army officials from India and Bangladesh will dwell at large on terrorism, the menace from which both the nations are severely affected, military cooperation and engagements between the two developing nations of the world besides its importance for bringing peace, stability and prosperity in South Asian region," EA officials said.

Since its inception, the joint exercise has expanded the field of mutual cooperation of the two armies, demonstrated the strong determination of both the countries against the threat of terrorism and has also emphasised on the goodwill that both the countries and armies jointly maintain regional peace and stability.

It was also informed that the state will host yet another joint exercise between the Indian Army and Myanmar Army likely to be held next week. Furthermore, it was disclosed that the Indo-China joint exercise will also likely take place in Meghalaya next year where it was expected that top officials of the People's Liberation Army (PLA) of China will be attending the meet.