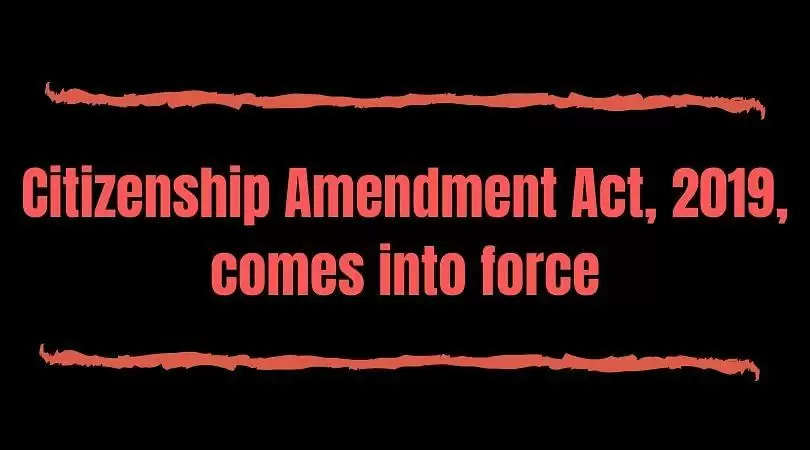 The Citizenship Amendment Act, 2019 has come into force.

In the notification published in the Official Gazette today, the Central Government 'appoints' the 10th day of January, 2020, as the date on which the provisions of the Citizenship Amendment Act, 2019, shall come into force.

The Citizenship Amendment Bill was passed by Lok Sabha on 10 December 2019. A day before, it was introduced in Lok Sabha, and a day later it was passed in Rajya Sabha. The President gave his assent on 12th December 2019 and it was notified on the Gazette the same day.

This amendment to Citizenship Act, 1955, liberalizes the grant of citizenship for non-Muslim migrants from Pakistan, Bangladesh and Afghanistan who had entered India before December 31, 2014. As per proviso introduced in Section 2(1)(b), they will not be regarded as 'illegal migrants'. It also makes migrants belonging to Hindu, Sikh, Buddhist, Parsi, Jain and Christian religions from Pakistan, Bangladesh and Afghanistan eligible for citizenship by naturalization if they can establish their residency in India for five years instead of existing eleven years.

The Government is yet to frame Rules in this regard, detailing the procedure to be adopted by authorities, by amending Citizenship Rules, 2009. There were reports that a decision in this regard will be taken after seeking experts' advice.