Ban on Sale of cattle for slaughter: Will BJP manage to turn it into a reality in Northeast India? 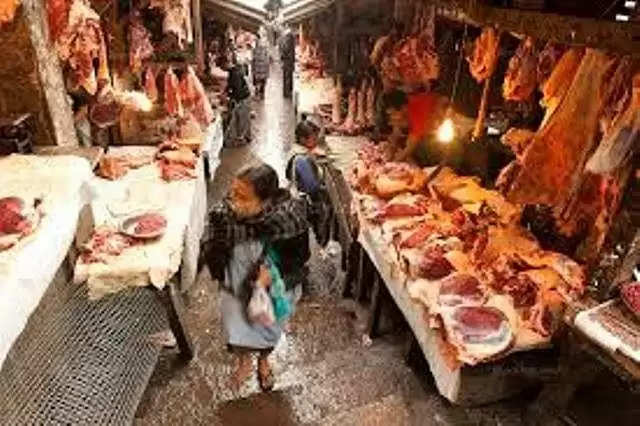 SHILLONG, May 27: The surprising gazette notification issued by the environment ministry recently banning the sale of cattle for slaughter across the country is likely to affect Northeast India the most as cattle are usually imported from outside the region,  like from Uttar Pradesh and Bihar.

While this ban has struck a sentimental chord amongst the people in the region, provoking a war of words between political leaders in the country, the BJP on the other hand maintained that this restriction is mainly to protect against cruelty to animals.

A cloud of confusion hovers around Northeast India  with  majority of its population being beef-eaters, since it is unclear whether the region falls under the region or not.

But likewise, even if the region falls outside the purview of the ban, it will be affected since the region is dependent on other states for cattle imports.

These points will help you understand about the new restrictions imposed on the sale and slaughter of cattle.

## A gazette notification is titled Prevention of Cruelty to Animals (Regulation of Livestock Markets) Rules, 2017.

## According to this notification, no one can bring cattle to an animal market unless he or she has furnished a written declaration that the cattle will not be sold for the purpose of slaughter.

## Further, upon sale of cattle, the animal market committee will take an "undertaking" that the animals are for agricultural purposes and not for slaughter.

## The new rules do not amount to a blanket ban on cattle trade or their slaughter, and license breeding remains legal. But the move will crimp supplies to the country's Rs 1-lakh crore meat and allied industries which sources about 90% of their requirements from animal markets.

## The central regulation for cattle business notified this week allows only farmland owners to trade at animal markets. The notification covers bulls, bullocks, cows, buffaloes, steers, heifers and calves, as well as the camel trade.

## The ministry drafted the rules on Supreme Court directions aimed at improving condition of animals in animal markets.

If elected to power, BJP assures not to impose Beef-Ban  in Meghalaya, Mizoram and Nagaland

Though it was reported that this is not a blanket ban on cattle trade and parts of Northeast are likely exempted from the restriction, however, it is important to note that cattle in the Northeast are mostly imported from other states like Uttar Pradesh and Bihar.

According to a report in The Hindustan Times, Slaughter of milch cows is banned in all states except in Kerala and in parts of north-east India. However, there are some news agencies which reported that the ban is applicable in all the states except Jammu and Kashmir.

TNT-The Northeast Today spoke to BJP national spokesperson and in-charge of Meghalaya Nalin S Kohli on this issue and this is what he has to say:

"I don't think it's a cattle ban, there is some confusion about this. I think most people who are reacting and saying it is a nation-wide cattle ban are actually talking without having seen the notification."

Asserting that the restriction is more about cattle protection, Kohli said, "It has more to do with cattle protection not ban. It needs to be studied more so that a structure response can come over the next few days."

When asked whether the ban will affect Northeast since cattle are mostly imported from outside the region like from Bihar where the ban on sale of cow is likely be strongly adhered to, Kohli said "Unless I study the notification, I cannot comment on this."

Stating that he is yet to study the notification in detail, Kohli said "I'm surprised because what was reported in national newspapers is in contrast of what has been published in the Northeast, so that is why unless I study it and see it, I can't give a structured comment,"

Kohli however, asserted that "The slaughter aspect has something to do with environment and the main objective is protection of cattle which is a positive objective."

Response of Shillong-based meat vendors on the ban

In an interaction with many meat vendors in Shillong, the latter stated "If preventing us from earning our livelihood and disturbing our food habit is what the government intends to do, then we can't help but resort to other means to ensure that our right to livelihood is not oppressed."

Reacting to the ban, a local meat vendor, P Mawiong said "We are illiterate people, when they say there will be a ban, how else can we argue other than being on the offensive. If we are forced to take to the streets to fight for our right to livelihood, I'm ready to do that."

Mawiong who has been in this profession since 1997 criticised the government's move stating that "Just because PM Modi has the power to enforce a law, doesn't mean he has to do it without thinking about the other communities who have been eating beef for generations now. Why attack our food habits?"

79 pc non-vegetarians in Assam; beef and pork most consumed in Northeast India

Meanwhile, another vendor, N Lyngdoh Lyngkhoi said "We don't think it is a smart move. It will the divide the country into two, as a matter of fact, it has already started. Our local representatives should be sensitive enough to flag this issue with the concerned authorities in Delhi. Our leaders should be united."

Echoing similar view, B Syiem who has been in this profession for 17 years asserted that this ban even if it is not applicable in the state, will have a negative impact on the beef eating community across the country and in the region as we hugely depend on cattle from outside the state. If the sale is ban in other states, how else can be get them?"

Time and again, the BJP government has ensured that ban on cattle slaughter will be imposed in Northeast India.

Beef may be abomination for the BJP. But as the assembly elections draw closer in many states like Nagaland, Meghalaya and Mizoram, it insists there would be no beef ban in Christian majority.

While regional party in Nagaland NPF which is a coalition partner of the BJP led government in Manipur has maintained that beef ban is impossible in Nagaland, the BJP has however stated that the state government should decide whether to ban cow slaughter with the RSS rallying behind hopeful that Northeast Indians will stop beef consumption.

What is left to be seen is whether beef politics will be successful to make it way into the Northeast or will the BJP succumb to the cultural realities in the region by going by what it promised to do so if it wins the elections in three Christian dominated states like Mizoram, Meghalaya and Nagaland which is ''No Beef Ban".