Article 371(G) giving special rights to Mizoram not to be scrapped: BJP 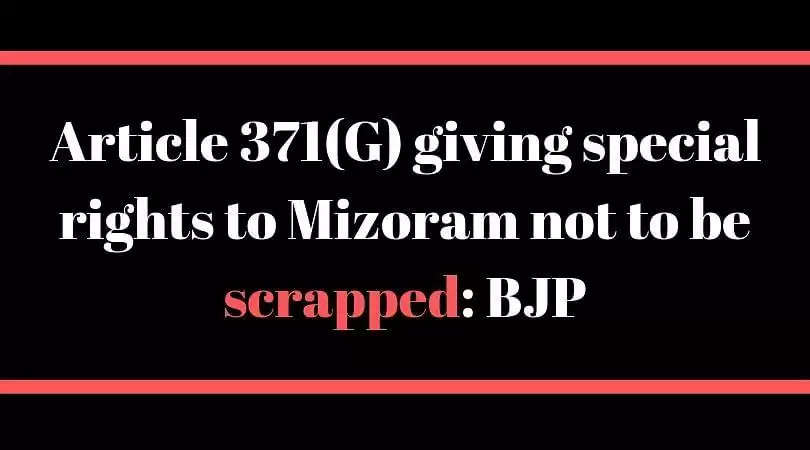 The BJP Mizoram unit on Thursday asserted that the Narendra Modi government has no intention to scrap the Article 371(G) that gives certain special provisions to the state, following the revoking of provisions of Article 370 in Jammu and Kashmir.

Scrapping of Article 371 was never in the agenda or manifesto of the BJP and the NDA government would not touch it, BJP state unit general secretary Vanlalhmuaka said.

Article 371(G) of the Constitution states that the Parliament cannot decide on the matters of the religious and social practices of the Mizos, civil and criminal law of the land, land ownership transfer, and customary law procedure without the consent of the Assembly.

"(BJP national president) Amit Shah made a statement in the Parliament that Article 371, giving special safeguards to the north eastern states, would not be altered," he told reporters here.

Shah had on August 6 said in Lok Sabha that there was no comparison between Article 370 and Article 371 and the government does not have any intention to remove Article 371.

Vanlalhmuaka accused state Congress chief Lal Thanhawla of trying to misguide the Mizo people by claiming that the Article 371G was also in danger in the wake of the abrogation of the Article 370.

Hiphei, another senior BJP leader, compared Mizoram to a room in a home called India, which is occupied by a newly-married couple and people should knock before entering it.

Hiphei said he had made this analogy while opposing a motion on scrapping of the Inner Line Permit (ILP) system in Mizoram when he was a member of Rajya Sabha.

"I had made it very clear that Mizoram is not home for all Indians, but India is home for all the Indians. Mizoram is like one of the rooms of India. A newly-married couple is in the room, so anyone trying to enter it should knock first," said the former assembly speaker who joined the BJP last year.

Hiphei who was a Rajya Sabha member of the Congress between 1990 and 1996, said the ILP was not in the manifesto of the BJP and the system would not be affected. The ILP is an official document issued by the Centre required by non-Mizo people to travel in Mizoram.