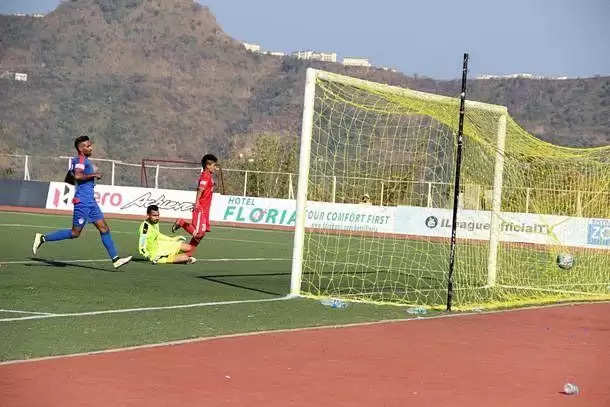 Aizawl FC held defending Champions Bengaluru FC to a 1-1 draw as the current I-League champions took on the Northeast side that has been in superb form. Both goals were scored in the first half of the match with Aizawl scoring first in the 40th minute with Brandon Vanlalremdika finding the back of the net. However, Bengaluru FC talisman and Indian international striker Sunil Chhetri equalized within five minutes of the Aizawl goal.

Aizawl FC hasve had brilliant form at home as their unbeaten home streak continued. Coming on the back of 4 back to back home wins, the Mizo side had to settle for a point which they will happily take from favourites Bengaluru.

Aizawl could have won the match if they had scored the many chances they had in the first half as they had 3 shots on target to the away sides' one shot. The second half saw Bengaluru come at the hosts more and more and a big chance to win the game for the visitors came in the 55th minute as the away side were awarded a penalty. However Aizawl FC keeper Albino Gomes saved the shot as he punched away the Sunil Chhetri attempt. The home side had a few chances in the second half but none as good as the first half.

Aizawl FC who were set to be relegated this season has shown excellent form and their improvement in just a span of a season is sensational. Coach Khalid Jamil has done an amazing job with the relatively young team with great buys such as Jayesh Rane. The Northeast side stands third on the table with 17 points just behind the Bengal clubs –Kingfisher East Bengal (21 points) and Mohun Bagan (18 points).

Both Northeast sides in the I-League—Shillong Lajong FC and Aizawl FC have performed well and with Shillong Lajong holding powerhouse Kingfisher East Bengal to a draw, the Bengal sides can expect a tight race to the top. Shillong Lajong are on 4th just above defending Champions Bengaluru FC who have 12 points with the Shillong side on 13.