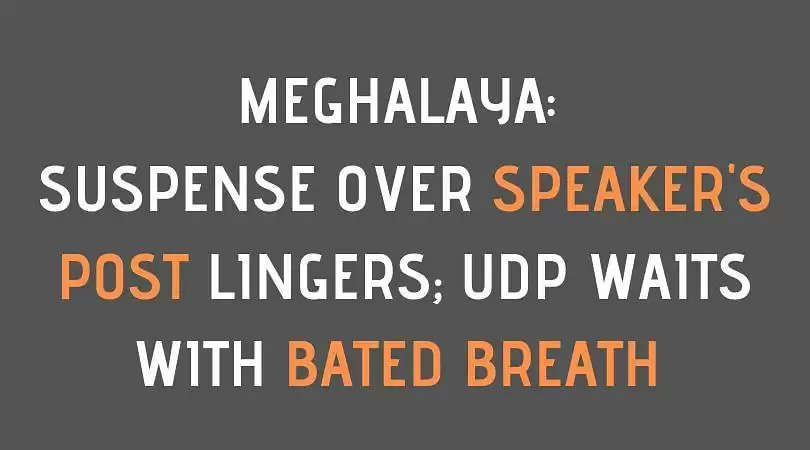 United Democratic Party (UDP) senior working president, Bindo Mathew Lanong has said that they are ready to wait for the MDA meeting to take a consensus decision on the Speaker's post.

"If the late president of the party, Dr Donkupar Roy was alive, the post of Speaker would have remained with us," Lanong told over telephone from Williamnagar here on Friday.

According to him, the untimely death of Dr Donkupar has created this peculiar situation. "But now we are ready; we have to wait," he said.

When asked that there was no agreement as such that the Speaker's post should go to the UDP, he said that let us not talk about the agreement.

"We are not concern how the post was given to us. Why should we go into details. Our main contention is that the post of Speaker was given to late Dr Donkupar and we would like that this would remain with the party," he added.

Earlier, Meghalaya Chief Minister, Conrad K Sangma had stated that the decision on the Speaker post will have to be decided by all the partners in the MDA.

"When it comes to the Speaker's post it cannot be an individual decision," Sangma had stated adding that each and every partner in the MDA will have their own opinion on the issue.

Deputy Chief Minister,  Prestone Tynsong had stated the decision on Speaker's post is not the prerogative of the UDP. When asked if there was an agreement that the UDP will get the Speaker post, Tynsong had said that when they had formed the MDA Government last year, late UDP president, Dr Donkupar Roy had offered himself for the post.

"Being the senior most leaders, we were all happy when late Dr Donkupar made the offer. But there was no agreement as such on the post of the Speaker," he said.