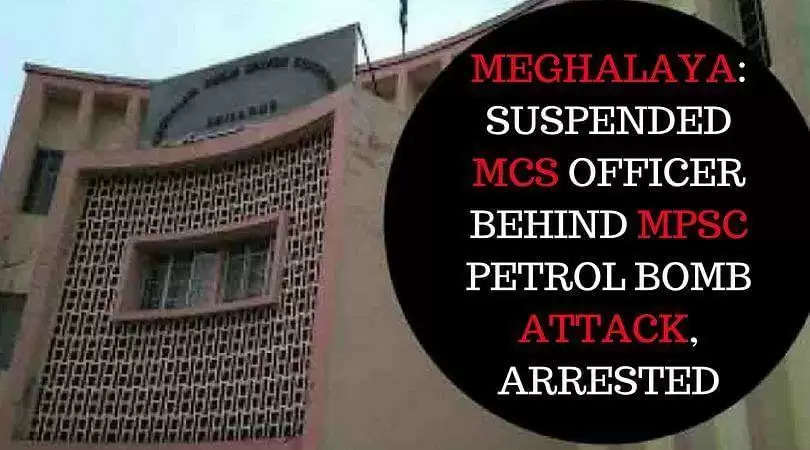 The Meghalaya Public Service Commission (MPSC) petrol bomb attack case is almost cracked with the surrender and subsequent arrest of the mastermind behind the case. The fifth and main man is a suspended Meghalaya Civil Service (MCS) officer, who was earlier arrested in the 2015 PJ Marbaniang controversial death case.

East Khasi Hills Superintendent of Police (SP), Davis NR Marak confirmed that the fifth and mastermind behind this case surrendered before the Lumdiengjri Police on Wednesday and has been booked under various sections of the IPC for abetment and under the Prevention of Corruption Act.

However, the SP refused to divulged the identity of the arrested officer and commented, "I can only say, he is a suspended MCS officer. He has been forwarded to the court today and we have sought police custody."

It may be mentioned that two unidentified persons went to the office of the MPSC and lobbed a petrol bomb in the room of the Commission's Secretary WAB Booth damaging important documents, computers etc on July 10.

Following the FIR lodged by the Commission, the state police have also constituted a special investigating team (SIT) headed by Superintendent of Police (City) S Rynjah to probe into the incident.

And after nearly two weeks since a petrol bomb was lobbed at the MPSC building, the Police arrested 4 persons alleged to be involved in the incident on July 23. It was during the preliminary investigation, it was revealed that the four men were paid to carry out the attack.

It may be mentioned that Rs 50,000 was given to get the job done — Rs 18,000 each to the two men who lobbed the petrol bomb, 10,000 to the man who distributed the money and the remaining amount to the man who picked up the two culprits after the attack.

Marak said that the person, responsible for distributing the money to the three men, works in the suspended officer's house. "This is how we link his (officer's) involvement in the crime," he said adding that they also found out that soon after the matter went out of hand, the trio received threats, warning them not to divulge anything to the police. It was reported that after investigation, it was found out that the person issuing the threats is a driver of the officer's sister.

When asked about the reason behind the attack, the district police chief said "We have not been able to question the accused. He has been forwarded to the court. We will get to connect the dots once he is in police custody."

Meanwhile, sources informed that the reason behind the attack could be due to the fact that the suspension of Passah came following his arrest in the PJ Marbaniang case, which was probed by the Special Investigating Team headed by then SP (City) of East Khasi Hills, Vivek Syiem. Passah was one amongst the five people who were arrested for abetment of the suicide of PJ Marbaniang.

"This could be a revenge attack. They couldn't get to Vivek Syiem, so they targeted his wife, the Commission's Secretary WAB Booth," said the source.

Source also informed that there could be another reason. Booth is currently conducting an enquiry into the Sericulture scam and it could also be linked to this case, in an attempt to disrupt the process.