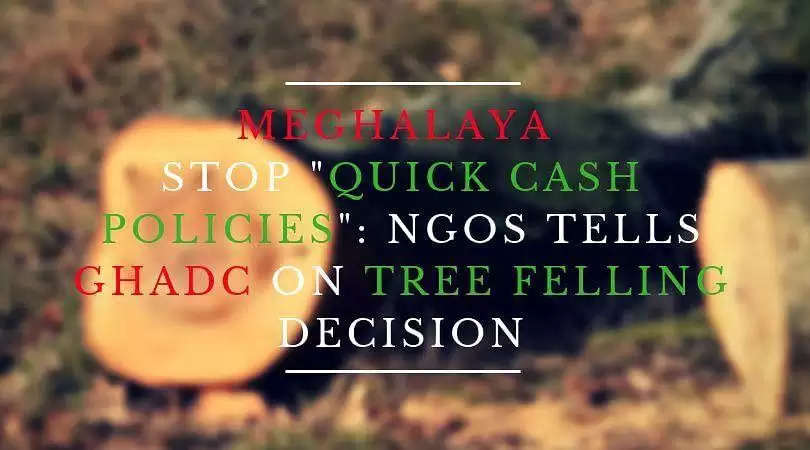 The decision of the NPP-led Executive Committee of the Garo Hills Autonomous District Council (GHADC) to auction mature trees to meet the financial crunch it is currently facing hit a roadblock following protests from several students' organisations in the region.

Students' Groups including — GSU, ADE, AYWO, CEPARD, AHAM and AYC have expressed their displeasure over the decision and sought it be rescinded.

In a release today, the GSU called the act "extreme and negative" adding that the clearance of forests would be a boon for illegal squatters.

"The impact will be catastrophic as it will not only see destruction of flora and fauna and impact water tables, it will also led to corruption where not only mature but non mature trees will also be felled," said president Tengsak Momin adding that unscrupulous businessmen would definitely take advantage.

"The damage done in the long run will be irreparable as in some places it will aid influx by giving a chance to illegal immigrants to settle in the cleared forest areas. The GHADC cannot simply brush away this apprehension," he added while showcasing the example of Medhipara (B Mohal) where there are not only squatters but illegal rubber plantations and stone quarries.

"Forest reserves in Naguapara and Phulbari range have been a good deterrent to squatters of illegal Bangladeshi descent. Should this forest be cleared the danger is stark and real," he added.

The GSU felt that the GHADC should instead take radical steps to streamline its revenue collection and put into action a deterrent law where corruption in its financial system must be tuned to ward off revenue leakages.

"Complaints galore regarding the revenue collected by the district council being siphoned off and money withdrawn frequently and illegally. Instead of evading and sidelining this actual problem the GHADC must eschew "quick cash policies" before irreparable damage is done," the NGO added.

The NGO also added that it would not be a mute spectator on the matter and would push back if the decision to fell 800 mature trees was still persisted with.

"If the GHADC wishes to solve a problem by creating more problems like deforestation, abetting influx, destruction of water tables, creating spaces for squatters etc the GSU will fight tooth and nail against such policies," stated the release.'

The NGO urged the NPP led EC to stop such short sighted politics and withdraw the executive decision made to fell trees else face very stiff opposition.