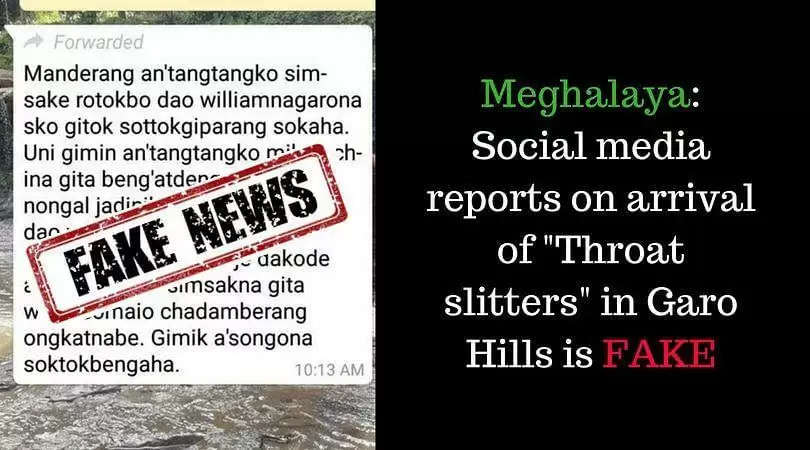 East Garo Hills, which was once a militant-hotbed of Meghalaya during the peak GNLA (Garo National Liberation Army) times, is now being terrorized by "FAKE" social media reports on the arrival of "Throat Slitters" in Williamnagar town in EGH.

"Please be alert, be careful people; It has been learnt that few unknown miscreants who are killing people (sliting throat) have reached Williamnagar," read the FB post.

Meanwhile, another FB post reads "I have heard that some miscreants seem to have entered our locality as well, so we are doing the round. I am so scared. It's God's wish, other than that, I can't say anything, if I have to die, I'll die."

It may be mentioned that during the last few months, fake news have ravaged the entire Northeast leading to the death of two innocent youths in Karbi Anglong district of Assam and several others in Tripura besides creating confusion and fear in the minds of the people of Meghalaya and Nagaland regarding the presence of children kidnappers and organ thieves.

In another FB post, reports were doing the rounds that there was an encounter between the GNLA – NDFB and the police in Songsak in East Garo Hills, to which Police have denied the occurrence of such an incident and termed the reports as "Fake".

Meanwhile, the Meghalaya Police have asked people not to fall prey or believe in such fake reports and instead report to the concerned authorities regarding the circulation of such fake messages on Whatsapp or Facebook in order to contain the issue before it spreads.

"You may be arrested; spreading fake or false information through social media like Facebook and WhatsApp may land you in jail. Group admins are also responsible and they also may be arrested, if they didn't take due actions to stop it. Public are requested not to believe in rumours. They should check and report if any information with the nearest police stations," said Meghalaya SP (CID), R Muthu.