Meghalaya | Shylla lashes out at Bill opposition: “If India says it is not needed, then we will leave the country” 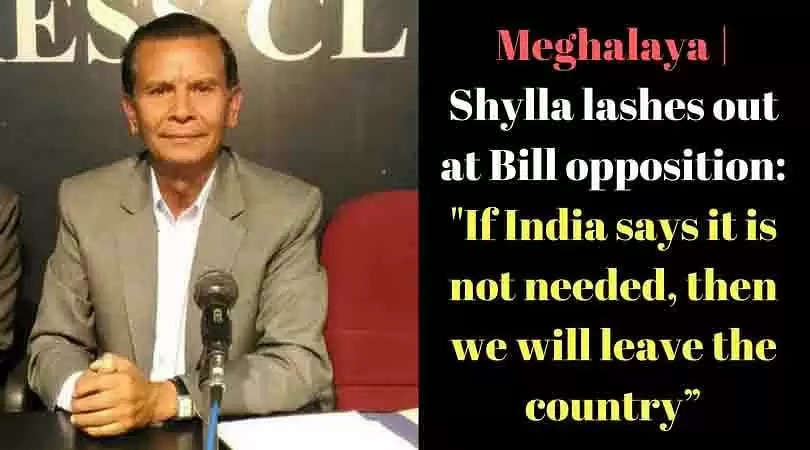 Shylla said it was the government's job to study the bill and send suggestions to the governor with a request to speed up its assent.

The government would study the bill at the earliest and any shortcoming would be addressed, said Tynsong adding that it would only comment on the bill if the governor seeks the government's views.

"We will have nothing to say even if the governor approves the bill without consulting the government. Being a constitutional body, the Khasi Autonomous District Councils (KHADC) is free to legislate laws in matters under its jurisdiction. The government is not authorised to intrude in matters falling under the Council," Tynsong told the media.

Addressing the media, Shylla lashed out against the women activists opposing the bill saying those who oppose the bill have their own vested interests.

"Tribal women are glad about the bill. It is only those who wished to marry non-tribals who are saying it is 'injustice'. But we are not prohibiting women from marrying anyone. Those who speak about injustice are only Patricia, Angela and Agnes and no other. They marry non-tribals and they have every right to fight and should not be ashamed about it. But they should not interfere with the desire of those 90 per cent Khasis who want the bill. They are ones who open the door (to non-tribals)," Shylla said.

Shylla added, "We will call a public meeting of the Khasi-Pnar community. Whether the state government, Supreme Court or India accepts or not, we, the Khasi community will go ahead and affirm the bill… We have every right to safeguard the identity of the Khasi people. Nobody can stand in the way (of doing so). If India says it is not needed, then we will leave India."

Shylla dubbed people who oppose the Bill as "enemies of the Khasi community".

The CEM went further and slammed John Kharshiing by calling the Grand Council of Chiefs an "illegal institution of an individual".

"We will give an instruction that all Chiefs under the KHADC should no longer be part of the Grand Council as it is only a private organization of Kharshiing for his political career," he added.

"The salient part in the Constitution of India is safeguarding, protect and promote Scheduled Tribe. We are coming with the bill to protect the interest of the Khasi community," the CEM said.