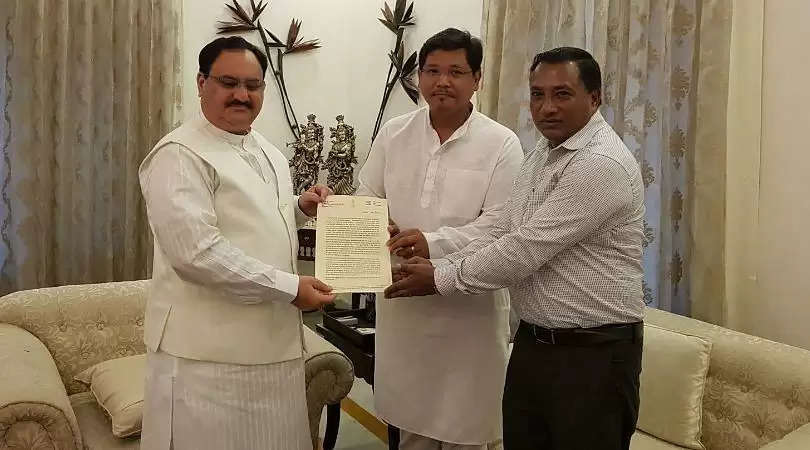 During the meeting, Nadda assured to extend all possible support from the Ministry to enhance medical services in the State.

A slew of development initiatives with regards to improvement of health infrastructure in Meghalaya was discussed at length and a memorandum to this effect was submitted by the Chief Minister and Health Minister.

The Chief Minister and Health Minister also expressed their gratefulness to Nadda for the sanction of Rs. 189 cr for Tura Medical College and has requested for the revised estimates to be considered, which is Rs. 244 cr.

State Health Minister A L Hek apprised the Union Minister that critical infrastructure were being created with the support of the centre, which has created an enabling environment and a fillip in primary, secondary and tertiary health care in the State.

Hek also sought Union Minister's intervention on setting up on Anti-Retroviral Therapy (ART) Centre at Jowai. Nadda has assured that all support from the Ministry will be provided to Meghalaya for providing care to HIV/AIDS patients.

Issue related to upgradation of several PHCs, CHCs and sub-health centres were discussed at length with specific request for upgradation of Ganesh Das Hospital Shillong and infrastructure support for Cancer Care Wing in the State.

A special request was also made for setting up of specialized physiotherapy and sports injury centre in the State with regards to the upcoming National Games in Meghalaya in 2022. Union Health Minister has assured that all support to impart training would be provided by the Ministry of Health and Family Welfare.

On the issue of non-functional equipment in health care institutes in Meghalaya, which was discussed, Union Health Minister has suggested for availing the benefit of Bio Medical Maintenance Programme, wherein an MoU with an agency has to be signed for annual maintenance contract, which will be funded by the Ministry.

The issue of development of NEIGRIHMS was discussed at length with the Union Health Minister to which Nadda has assured that necessary interventions will be made for improvement of the institute and resolve several pending issues with regards to administrative functioning.