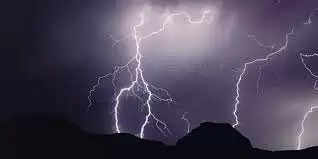 TURA, September 13, 2018: One person was killed and 30 others injured when lightning struck them in Meghalaya's West Garo Hills district, police said on Wednesday.

The incident took place at Gimegre Songma village of the district on Tuesday at around 4 pm during a football match, they said.

Quoting police information, Singh said 14 people had come for treatment a the Phulbari public health centre and two were admitted for burn injuries while the others were let out after first aid.

Eyewitnesses of the incident said lightning struck a tree near the ground and the deceased was one of those who were taking shelter under it.