Meghalaya| Has Militancy survived due to Political Patronage? Here is what the Home Minister says 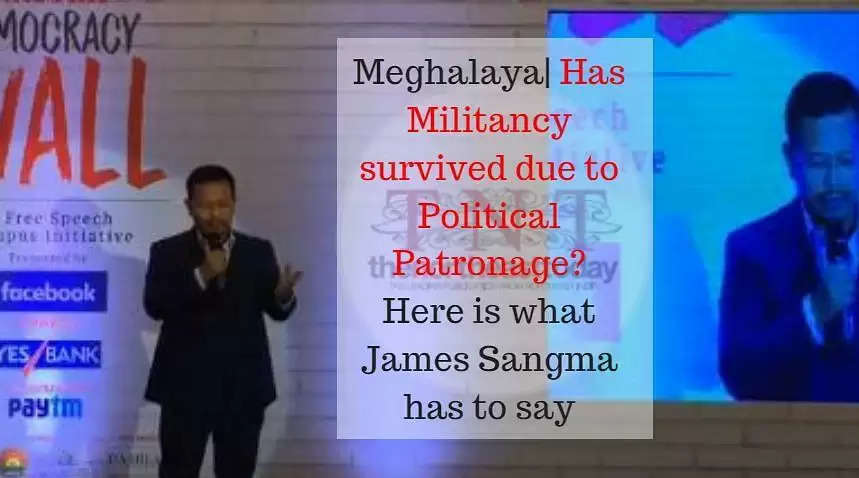 Meghalaya Cabinet Minister of Home, James K Sangma while addressing young students at NEHU, Shillong touched upon important topics of discussion including militancy and political patronage, his tryst with dynastic politics as well as the role of Corruption in the political scenario of the country.

"Democracy is such a concept that allows space for everyone to come. But then people who belong to political families do find themselves at a slight advantage in terms of how we grew up and this is my own personal experience. We grow up groomed to become future politicians and we started meeting people right from the time we were 5 years of age following in the footsteps of our father and learning the tricks of the trade. I think because of this we are definitely at an advantage in the field of politics", said James Sangma while addressing the students at NEHU campus Shillong.

Responding to a question by editor of the Shillong Times Patricia Mukhim on whether militancy has survived over the years due to political patronage as well as the emergence of interest groups that are capturing certain spaces in society and replacing the law, James replied, "It would be wrong on my part to disagree with the 1st part of your question. Militancy could not have survived all these years without some amount of political intent but then having said that, I think things are changing now because one of the biggest reasons why we have been able to tackle militancy in Meghalaya is because it has manifested itself into a social movement. The support of the public played an important role in fighting militancy. So now the patronage which was there from the politicians is slowly coming to an end because when the public takes a decision to stand up against something, politicians as such do not have a choice and have to go ahead with the flow. Hence political patronage to militancy has come down to a very negligible level".

Answering the second part of Patricia Mukhim's question, James added, "In any kind of a situation where a vacuum suddenly develops, it has to be filled and there is this transitional phase where there will be certain pressure groups who will try to come into the picture and have their say. But whenever we talk of maintaining law and order, it is the duty of the government to keep a check on this and deal with it in the most effective manner", he said while assuring that this will be implemented in the days to come.

While replying to a query on role of corruption in the political scenario, he added, "Corruption and Democracy is like a vicious circle and to elucidate on this- elections take place and we have seen this very unfortunate practise of bribing the voters which in turn influence their votes in favour of those who bribe them. Duw to this, the concerned MLA or MP develops an attitude whereby he says that since he has already bribed the voters,it is okay not to work towards the development of the region or the voters. This in turn deprives the people of development. Once the peple are deprived and their standards of living do not improve, they go back to the concerned people and then the same cycle continues over and over again. Hence it becomes very important to break this vicious cycle somewhere or the other".

Elucidating the role of education in this regard, James said, "education plays a very important role in this regard. Education will help people to understand that their votes are more valuable than the money offered to lure them".

Talking about the security in the state and the prospects of peace talks in tackling the militant geoups, James stressed on the fact that if the government reaches out to the outfits, it is in one way acknowledging the values and beliefs followed by them.

"Our stand is very simple- There will be no negotiation with insurgents, militants or terrorist outfits. What we want for them is to lay down their arms, surrender and show that this is their voluntary intention and that they choose the right path by shunning the part of violence and initiate talks voluntarily and then we will definintely take this forward. we will never talk with any outfit while they are still engaging in their violent activities and this is the policy of not just the governmnet of Meghalaya but also of all states of India in fact. Also, I am happy to see a visible change in Meghalaya and peace finally returning to our state because the stand that we have taken seems to be working".

With respect to this, he cited the example of surrenders made by GNLA in the recent past. We have also given them rehabilitation package and are helping them to build better lives for themselves.

Talking about the role of education in reducing crimes, James said that education may not guarantee that the person will not commit a crime. There are many eduated people who commit various crimes. But education helps a society to be more alert and vigilant. I am sorry to say that education does not help a person to avoid being a criminal- Crime is something that exists in the psychology of a person. But I do hope that in an educated society, the level of crime will go down.

James also touched upon various other aspects of a democratic governmental set up while enlightening young minds from his experiences.

'Democracy Wallʼ takes the idea of free speech and meaningful engagement with governance, politics and society to Indiaʼs most vibrant campuses. It offers young and aware Indians a platform to express their thoughts and aspirations: in voice, prose, verse, painting or music.

It brings the top-of-the-mind concerns of millennials to the fore, stimulating substantial conversations. As a forum for open expression and healthy questioning of established ideas and notions, 'Democracy Wallʼ aims to help the next generation of Indians emerge as evolved citizens.

You can watch the full speech of the Cabinet Minister below: