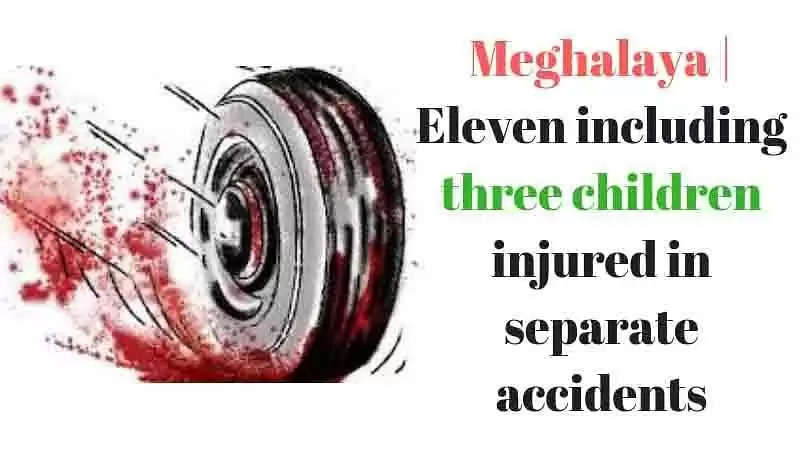 A staggering eleven people, including three children, were injured in separate road accidents in the state.

Donald Dorphang, 32, sustained injuries when his scooty skidded at Mawlai Phudmuri around 9:04 pm. He has since been shifted to Robert Hospital by 108 Shillong Base Ambulance.

Mohindro Roba, 32, who was in an i10 car sustained injuries as his car was hit by a Maruti car in Demsieniong Junction around 02:28 am. He has since been moved to Civil Hospital by 108 Lawmali Base ambulance.

Bacinus Malai, 31, and Silvanus Malai, 29, were involved in an accident whereby they sustained injuries when the Wagon R they were travelling in suddenly skidded and fell in a gorge at Sumer near Power House. The two injured shifted to Civil Hospital by 108 Umsning Base Ambulance.

Shirowell Roy Jana, 23, met with an accident when he went on the wrong side of the road and hit a drain near Sohiong Bypass rd around 12:45 am. The man sustained injuries and was first shifted to Sohiong CHC before he was eventually moed to NEIGRIHMS by Mawflang base 108 ambulance.

In a case of hit and run, one Tarek R Marak, 45, was hit by a vehicle when he was riding his bicycle at Damalgre, Melim road around 6:13 pm. The unknown vehicle left the spot and disappeared right away. The victim suffered a head injury and has been shifted to Tura Civil Hospital by 108 Tura Civil Ambulance.

Between R Sangma, 33, met with an accident while he was riding his Bike and fell down at ICAR Highway around 11:32 pm. The victim sustained multiple serious injuries and was shifted to Civil Hospital Shillong by 108 Bhoirymbong Ambulance.

Suraj Guri, 17, met with an accident while riding his Scooty ( ML05 R 2466) after he went dashing against a Tourist Etios vehicle ( MLO5L 8851), at Mylliem, Lad Lyngkien around 4:02 pm. The victim sustained injuries on his right leg and a suspected fracture. He has since been moved to Civil Hospital Shillong by 108 Sohiong Ambulance.

In another tragic accident, a boy Andy Kharsati, 5, Ribhanisha Kharsati, 15, Ms Rihana Kharsati, 11, met with an accident when the Maruti car they were traveling in overturned as they were trying to avoid another vehicle at Pomlahier around 4:20 pm. All the three victims sustained injuries and were shifted to Mawryngkneng CHC by 108 Mawryngkneng Ambulance.