Meghalaya: DSEO’s ‘negligence’ comes to the fore; cancels exams at the 11th hour 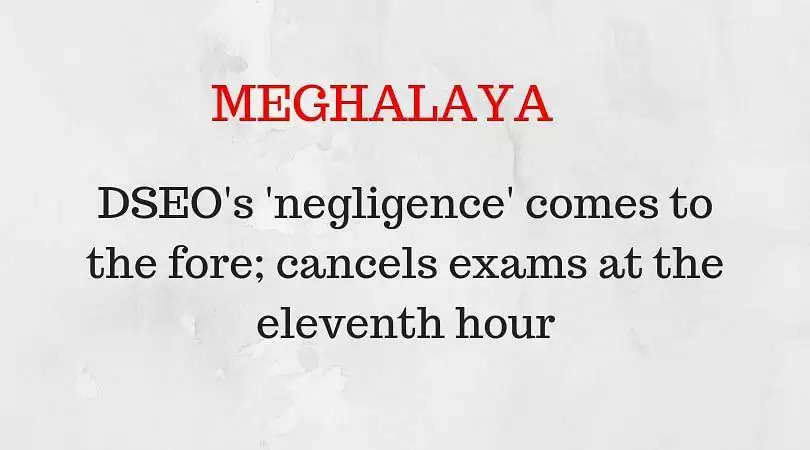 In a surprising move which has raised many eyebrows, the  District School Education Office (DSEO) of South West Garo Hills (SWGH) on Wednesday issued an order postponing the selection exams that were due tomorrow at the eleventh hour.

The order incidentally came out one day before the selection exams with many questioning the style of functioning of the education office in the district.

According to information received from sources, the DSEO order stated that owing to tomorrow, Oct 25 being the death anniversary of the first CM of the state, Capt Williamson Sangma, the examination due for Science and Technology was being rescheduled to Nov 1. The order also asks for all officer incharges to inform teachers as well as students of the date change as early as possible.

Apparently the order came after the declaration of a local holiday by the SWGH DC. The holiday declaration by the DC came way back on Oct 16. The exam schedule was originally taken out on Aug 8.

"How can you reschedule the exams at the last moment and expect people not to turn up. When everyone is aware that the day is death anniversary of Capt William Sangma, how can you schedule exams on this day? This is utterly ridiculous," said a parent on the condition of anonymity.

"Please explain to me — how many students use Whatsapp or even a phone. What about places which don't have internet or even mobile connectivity. Who will take the responsibility of informing all of them on the date change? So many of these students, who have been preparing for the selections, are going to be absolutely disappointed tomorrow," added another parent on being informed.

Most have questioned the delay in changing the dates when the declaration of a holiday was given more than a week ago.

"This is heights of laziness! What were they doing all this time," they asked.

Further anomalies in the English paper were discovered earlier with the paper being mixed with health education which prompted a recall of the examination papers for English, within the same district.

The DSEO, however, could not be contacted for comments.