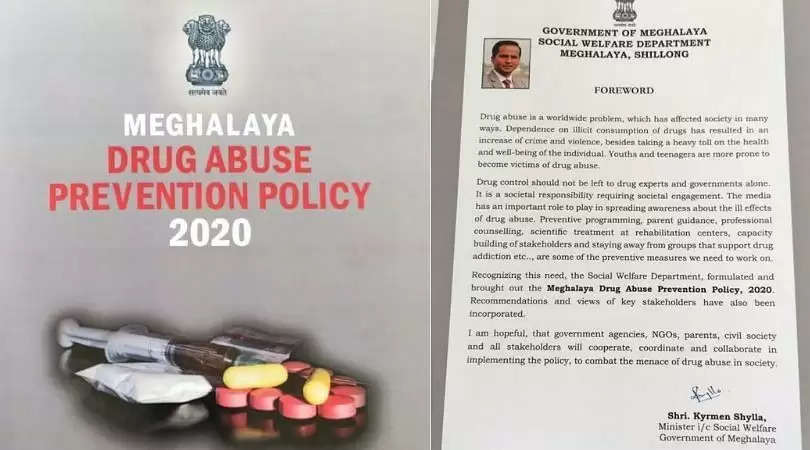 In his address to the gathering, Shylla expressed his gratitude to the Social Welfare Department and the State-Level Nasha Mukt Bharat Campaign Committee for organising the programme despite the ongoing COVID-19 pandemic.

"Drug addiction is emerging to be a serious problem in the country having dangerous consequences not just for the person using drugs but, on the family and society at large. The Ministry of Social Justice and Empowerment is the nodal ministry for Drug Demand Reduction. It coordinates, implements and monitors several interventions which include prevention, assessment of the extent of the problem, treatment and rehabilitation of users including the dissemination of information and generating awareness among the public," he said.

Shylla informed that the ministry had done a comprehensive national survey on the extent and pattern of substance abuse to find out the proportion of the Indian population who use various substances, including those affected by substance use disorders.

"The major findings of the national survey are presented in Magnitude of Substance Use in India 2019," he said.

Shylla stated that with this in mind, the Ministry of Social Justice & Empowerment came up with the Annual Action Plan 2020-21 – Nasha Mukt Bharat Campaign to be implemented in 272 districts identified as the most vulnerable in terms of substance and alcohol abuse.

"The Meghalaya Drug Abuse Prevention Policy 2020 would give a direction and a way forward in the battle against alcohol and drug abuse," he said.

"The vulnerable districts in Meghalaya are East Khasi Hills, West Jaintia Hills, West Garo Hills and South Garo Hills. I believe that Nasha Mukt Bharat Campaign will be successful in the state and in the four identified districts."

"Besides this, the state government has also implemented its Grant-In-Aid scheme for NGOs to help generate awareness on drugs," he added.