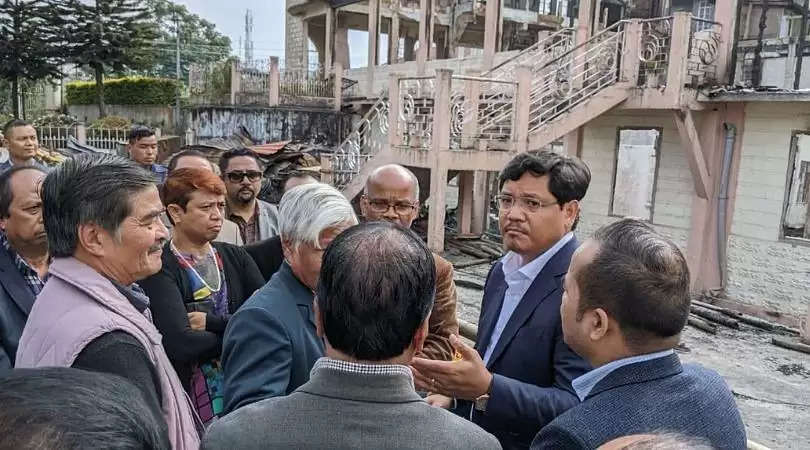 Meghalaya Chief Minister, Conrad K Sangma on Monday said he will sought a report on the fire incident which took place yesterday at Qualapatty in Shillong where a century-old building of the Church of God was reduced to ashes, killing an elderly couple — T Basaiawmoit and R Laloo including their pet dog.

The decision of the CM came following allegations of negligence on the part of the fire services station in responding to the SOS call of the local residents yesterday early morning.

"If there was any kind of negligence then this has to be inquired immediately. I was briefed by the Deputy Commissioner of East Khasi Hills that people were saying that the tragedy could have been averted if the fire service personnel reacted on time. I will ask for a report since it is a serious matter," Sangma said, while speaking to reporters here today during his visit to Qualapatty.

He also observed that what was more important was to ensure that such lapse should not happen in the future. Meanwhile, Meghalaya Chief Minister said that it will not be appropriate for him to response to this issue without speaking to the officials.

"Let me find out the facts as to what has happened. I will find out and get a detailed report on this issue," Sangma said.

Earlier, Rangbah Shnong of Qualapatty, Martamlin Pyrbot has blamed the delay of the fire services for the lost of two precious lives in the fire incident. "We will convene a meeting within this week to discuss on the future course of action to ensure that similar incidents doesn't happen again; to make sure that public service agencies respond to the need of the citizens," said the Rangbah Shnong.

"If we have to write to the Chief Minister also to get the government's attention, we will. We will decide all this in the meeting," Pyrbot had said.

Meanwhile, he informed that the he had visited the Church and it was saddening to see what happened.

"It was unfortunate what had happened. It is a very great lost not only to the Church and the believers but for Shillong city and the State as a whole," Meghalaya Chief Minister said.

Meanwhile, Sangma said that he also met the family members of the elderly couple who died in the incident.