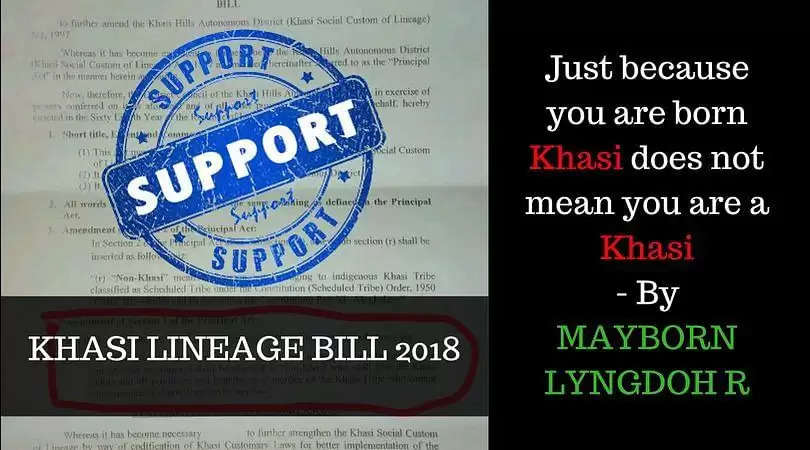 Governor returns the Lineage Bill passed by KHADC for further examination as a result of the glitches and confusion that it carries which I feel is the best for everyone.

The original Bill – Why do I support the Bill?

>> I support the Bill because I can see crystal clear how marriage has been used as a tool to forge an identity for the self-personal interests of outsiders. Most of them are not the original non-tribal inhabitants of Meghalaya.

>> I support the Bill because most of our (the original inhabitants, the rightful heirs) properties are being taken away. My own Khasi brothers and sisters have become tenants because the price of the lands have increased manifold in the last few years. Most of the properties are being owned by people who only have a Khasi identity towards the end of their names (that is, the 'Surname').

>> I support the Bill because our trades and businesses are slowly but steadily snatched away. All the trading focal points are annexed by non-khasis – Iewduh, Khyndailad, Laitumkhrah, Laban, Polo and all the pocket markets are swallowed by non-khasis. The authenticity of a Khasi businessman is found only in papers. Most of our own have now become street hawkers at the mercy of these. It is not an excuse.

I am against the pseudo-prophets and shepherds –Everything is wrong about some women spear-heading the protest.

ALSO READ | The Origin and Ancient Migrations of the Khasi People: Genetics Tells the Story

Some women are famous feministic false prophets. They lead their sheep and a host of women into thinking that we are going to lose our maternal status courtesy of the Bill. They talk at large how the Bill is going to completely wipe away the Khasi identity. What the people should understand is that they are talking from their personal stand-point. They take into confidence that all our women are going to marry non-Khasi men. If their prophecy is to be taken the Gospel truth, then the Khasis will truly be wiped away, should all of them decide to do so. But they should realise that all Khasi men are not worthless, useless and characterless. If tabulated, the weight of the good-men is much heavier in comparison to the worthless rogues. Why should these few rogues represent us? Delhi is known as the rape capital of India and statistics will tell you that not even 1 percent contribution is from the Khasi men, be it rape or any other crimes. You can argue that Delhi is not a Khasi or a Tribal State. But even Meghalaya is NOT a non-tribal state but the contribution of crimes from the non-tribals is alarmingly high (not taking away the crimes committed by the tribals). If Khasi men wear the mentality like that of the inhabitants of Delhi then logically most of the crimes should be committed by us.

The Bill never stated that FROM NOW ON ALL KHASIS SHOULD BEAR THE SURNAME OF THE FATHER AND THE ANCESTRAL PROPERTY SHOULD GO TO THE YOUNGEST SON. Our society will continue to be matrilineal. We will live!

Then again there are other women who state, "Benami is rampant by many greedy Tribal men and many leaders. . ." The statement is very misleading. Why would a Tribal man need 'Benami'? We can only assume what these women really meant. And since the article is published in a well-respected online news forum, I can only assume it meant what it says. Either the article is purposely written to mislead or it's just a classic example of a new height of indescribable delusionality.

Now, just because the Bill is, I admit, partially sexist in Nature, will the people rest their faith and hope at the hands of some women to lead? They will lead an entire Community of followers off a cliff for temporary gains and benefits. Sadly it reflects the same mistakes our ancestors made. It seems our fathers and fore-fathers have reincarnated in a different avatar.

Delusional hypocrites! For centuries you enjoyed the biased right to ancestral property, the biased love of tradition and the biased right of matrilineal and sometimes matriarchal too. Where were you then? Where was your conscience? Of course, you had no mouth as long as you're enjoying the personal privileges and benefits. The Bill takes away none of your rights. You have a right to choose your love, right to marry and right to start a family. The tunes you're playing is nothing but a selfish façade.

The Khasi society is one of the very few matrilineal societies in the world. What makes our society unique is that though it is matrilineal in nature and the ancestral property is being passed on to the "Khun Kynthei Khatduh", the "Kni" is allowed to intervene in family matters because the men are looked upon as protectors and NOT dictators. They are also being given a special kind of respect. We have something called the "Burom Kni". These Kni are being made advisors and not inheritors because our great ancestors saw the bigger picture. Should a man or woman be given too much of authority, he or she will grow tyrannical. Therefore, the quasi matrilineal-patriarchal prevents the weight of responsibility from overlapping.

ALSO READ | Toxic Masculinity: What the Amendment to Khasi Social Custom of Lineage Act, 1997 is really about

Pseudo-prophets, you talk about protecting the culture and tradition? Well, this is tradition and culture of age-old. The Kni has a right to intervene to protect the clan. But of course, you will not understand because your personal motives will be lost. You only need a reason for your sowing season, so that you can reap the fruits as long as labour is free. (The labourers are these misled sheep that are unaware that they are being led to the table to be sacrificed)

How easy it is for you to term the people supporting the Bill as misogynistic, chauvinistic, patriarchal and . . . Oh! You ran out of words? Enough is just enough!

As Khasi men, we never complained of injustice. We never complained of the right we were denied. One man did – we left him high and dry at Secretariat. We knew he was right on his own grounds. As a man, I and a sea of Khasi men and women understood his stance, but we respect the wisdom of our ancestors and the tradition we carry. He fasted alone!

As much as I am ashamed of a few parasitic women, I am however also ashamed of the handful block-headed and insensitive Khasi men who looks at the Bill as an opportunity to mock, to threaten and a licence to arrogance. They have become more degrading than what they already were. Morals, ethics and decorum seemed to be lost. They even dare to openly threaten rape without any moral conscience just because they do not concur to the Bill?

The Bill was passed to protect our women from opportunistic infiltrators, not for you to wield it as a weapon. They talk about, "Purity of Blood" (Just like the German Fuhrer), they spew venom with every word utter from their mouth, not even considering the first and foremost Khasi virtue of respecting our elders.

These are not Khasis. A true Khasi wears his honour and carries his respect. Just because you are born a Khasi does not mean you are a Khasi. You are born into a Khasi household. Your decorum, personality and words are very alien in every way.

To be a Khasi is something to be proud of. It is a responsibility and pride of every true man and woman, not an audacity of a mad dog.

Be it a man or woman, I refuse to let my people be burnt down by cannibalistic opportunists.

The writer can be reached at calebdelshe@gmail.com