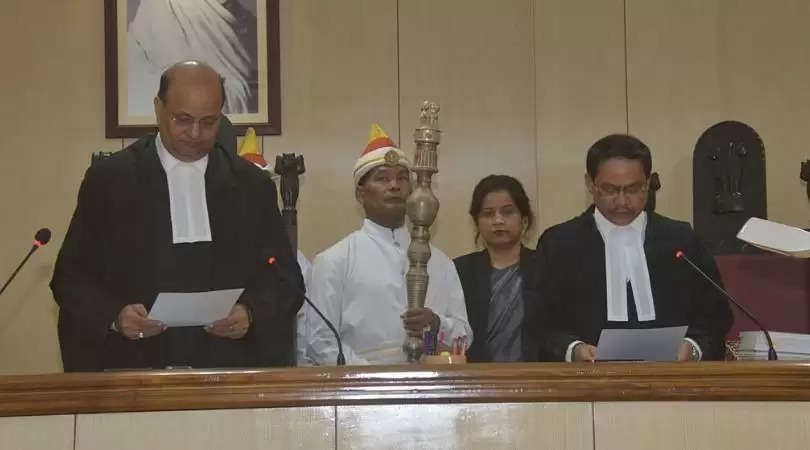 District and Session Judge, Shillong, Wanlura Diengdoh was sworn-in today as the new judge of the Meghalaya High Court.

Newly appointed Chief Justice, Justice Muhammad Rafiq administered the oath of office and secrecy in the court premises in the presence of senior advocates and others. Justice Diengdoh is the second Khasi judge in the Meghalaya High Court after Justice Hamar Sing Thangkhiew.

Speaking to reporters after being sworn-in as the new judge, Diengdoh said that it is his responsibility to do his job with honesty.

"I am here to serve for the good and welfare of my own people. I am sure that I will getting the support of everyone who are part and parcel of the legal system," he said.

When asked that the Chief Justice had mentioned about the 2500 plus cases pending in the various subordinate courts, he said that as the judge, it is his responsibility to ensure that the pending cases are dispose off.

"I will be working hand in hand with the Chief Justice and other judges to see these pending cases are disposed off," Justice Diengdoh said.

Diengdoh had joined the judicial service in 2000 as an Additional District and Sessions Judge. Later he held the post as the first registrar general of the High Court of Meghalaya. He was also the member secretary of the Meghalaya State Legal Services Authority.

Earlier, a number of media persons were not allowed to cover the swearing-in ceremony of the newly appointed jugde of Meghalaya High Court.

The invitation for covering the swearing-in ceremony was sent through DIPR. But on reaching the High Court, media persons fromboth print and electronic media were frisked and their cameras were taken by the security who are manning the entry point.

ALSO READ: Coal auction will happen in Meghalaya only after approval of draft policy: NGT

According to the security personnel, the order to restrict the media was imposed by the Registrar General.

When media persons asked the Registar General as to why they had been barred from covering the swearing-in ceremony, she said that there are some procedure of the court which needs to be followed.

"You people don't understand the institution," the adamant registrar said.

Interestingly, it was witnessed that the contract photgrapher-cameraman were allowed to take shot inside and click pictures during the swearing-in ceremony. Even members of the public were using their mobile phones inside the hall to take pictures and capture videos of the swearing-in.