An open letter to Meghalaya CM on ‘Illegal appointments’ in govt. deptts 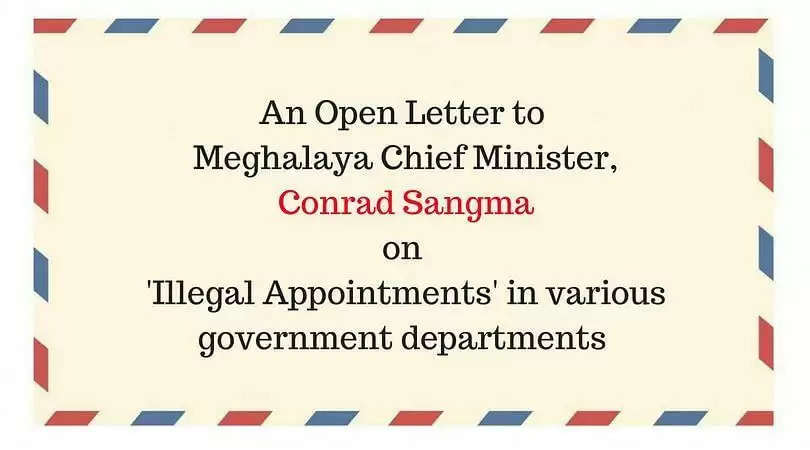 Subject: Rampant Illegal appointments in various Departments and Corporations of the State Government of Meghalaya.

With reference to subject mentioned above, I am noting with deep concern the frustration caused by Governments, both previously and maybe now too, as frequently, complaints come pouring in regarding rampant illegal appointments, posts not officially filled up, bonded students waiting for their turns which may never come and this, I say, is a criminal conspiracy to deprive deserving youth of their chances to work and serve the State.

It is no secret as we all know how interviews for various posts are a sham, money is exchanged for posts, officials and politicians pushing in their own wards, interviews are cancelled to wait for relatives of those in power, marks are tampered, interviews conducted with pencils to adjust marks later, (This was after white ink scam) etc etc. There are many job aspirants, who run from pillar to post, looking for Challans (which strangely are not often available), applying for the posts duly, yet are shunned because of the "preferred" selected few.

I am sure by now you have noticed this, and as Law Makers elected to represent the people, it is the duty of every member of the Meghalaya Legislative Assembly to uphold the law and not break them.

When many youths are jobless and unemployed, there is no proper follow-up by the Government officials with the appointing authorities to ensure this is corrected. This I feel, is a slap to the unemployed and a policy any honest Govt should do away with immediately.

The latest being the delay by the Departments of Agriculture and Horticulture in recruiting the bonded agriculture graduates to the posts of ADO, HDO and EO.

It surely is an irony that Departments do not have anyone to monitor the smooth functioning of the Government in absorbing the manpower already waiting and well trained. Yet, Government spends crores paying the Government servants and delivery is almost NIL. It can be said that Governments that are not functioning, does not serve its people and is unconstitutional.

Now I would like to further apprise you, it's not only the job seekers who are in frustration, but also promotion seekers, whose promotions are stalled because of post retirement jobs for corrupt greedy officials who think no one else can serve except them.

We also notice that there were creation of Societies, Missions, Corporations and Agencies, having IAS Officers as board members, posts craftily planned with the help of definitely few bureaucrats, tailor-made to fit them after retirement.

Money of the Government is siphoned off to these Societies, Missions, Corporations and Agencies and persons heading these institutions get more freedom to loot, as they appoint and terminate at their will, without any standard norms or authority of Government, as no Acts were passed for setting up of these Institutions. All are registered under a Societies Act.

Now for a lay person like me, I fail to understand how serving bureaucrats already burdened with the workload at hand in various departments can also be Board Members of Societies? This surely gives room for corruption and nepotism and manipulations.

In one such Corporation (the MTDC) I am told one Engineer is in charge of all projects and in fact runs the projects at his liberty, without floating tenders and he uses names of the firms and executes the work himself but with blessings from the official supervising him. I am told "you please them, you stay in; you squeal, you are out and terminated or demoted!" That is how it is and it really leaves room for much corruption especially in a state like ours which is in a financial crunch and cannot even pay compensation to victims of violence.

The NSTDA (New Shillong Township Development Agency) has retired officials running it and funds are pumped in for reasons best known to the few. The other MBDA (Meghalaya Basin Development Authority) commonly nicknamed by some the "Basin full of Holes" also headed by retired officials, pays almost 75000/- per month to the person running it.

I am also getting information that in MTDC (Meghalaya Tourism Development Corporation), back door appointees are also there, pleasing the heads there and much of Govt fund is pumped in here too.

With the giant Ghost Crowborough minting money for few, it is a wonder no Politician or bureaucrat hauled up anyone in the scam here. These Corporations and Agencies are a place of posting for relatives of Chairman's and officials and a money minting agency for the corrupt.

Since some serving bureaucrats are board members in many of these entities, financial rules are flouted, and most officials and staffs are having the best of everything in both or many worlds.

Sadly recruitment policies in the State are not pro-people but pro powerful class.

For all we know these institutions could be now funding Political parties, Politicians, Bureaucrats, Engineers, officers etc., while common man eager to work honestly are denied any job. Every post seems to be up for sale to the highest bidder and this is the reason of slack work. The voice of few whistle blowers is clamped down and they are not given room or air to breathe.

Instead, those who help corrupt are even given freedom to disobey orders and one such example is in the office of the MIDC. It may be mentioned that an order was passed on the 18th June 2013 by the then Commissioner & Secretary, Commerce & Industries Dept, to the MD, MIDC, directing him to cancel order issued by MD, and ordered termination of temporary staffs and orders for necessary procedure for selection of candidates is to be taken up. But inspite of that, action was not taken and some posts were regularized and temporary appointment continued.

ALSO READ | An open letter to the heartless men from an innocent, fearful Shillong girl!

In an RTI filed to ascertain if orders were followed, I have noticed that the employees illegally appointed were still working and that one of them has even been regularized as the person happens to be related to a staff in the MIDC.

This is sheer nepotism and corruption by some officials serving in this office and I have also been getting information that immediate relatives of Politicians (Chairman's) are appointed in Corporations like MIDC and MTDC, who are slyly given backdoor appointments. This is injustice to those in need of a job and who are duly following the law in trying to get a job legally and are not seeking political favours.

It is also noticed that in many Govt Departments and Govt created Societies, the rules and procedures for recruitment are not followed and corrupt officials seem to get extensions even after retirement. This should not be a policy of the Govt and posts that will be vacant should be informed to the respective appointing authorities of the Centre or the State, so that the process for timely appointments can be carried out with no deterrence from any quarters.

It may be mentioned that the State Government is formed for the betterment of the Public and not for interests of a few. Many youths are jobless as most posts are allotted to those who can pay and whose relatives are already serving or whose relative is a politician. Rules for recruitment are not followed and till date many departments are having no service rules.

I urge that your good office will kindly ensure, that service rules for appointments in the State Government should mandatorily be applicable to all departments where service rules are not yet prepared, haul up erring officials who made illegal appointments, get a refund of the Government fund paid for illegal appointments and State Govt undertaking Units should be strictly monitored by honest officials and recruitment rules be adhered to also by these units. An urgent notification in this regard is urgently needed and there should be immediate termination of staffs not employed by rule and no regularization of illegal appointees should be made.

Govt should immediately stop giving extensions to retired persons and posts should be filled up immediately by a proper procedure. Govt Undertakings should be passed by an Act of the State strengthening the sanctioned Office, giving it the legal status and making it Constitutionally bound, having posts to these entities duly advertised and let these posts not be created for the powerful and influential nor for retired persons already enjoying big pensions.

This will give hope to many households and many deserving job aspirants.

Thanking you in anticipation for a prompt action from your end.