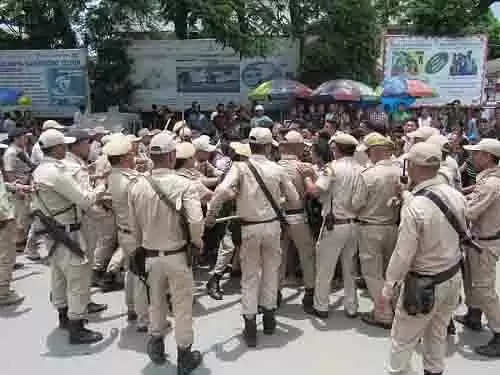 IMPHAL, July 8, 2018: Students under the umbrella of Joint College Students' Forum on Saturday surged towards the chief minister's bungalow demanding the declaration of college semester exam results within three days.

The students blamed the government for remaining "idle" towards the stalemate of Manipur University because of the total shut down strike imposed by the varsity students.

Forum convener Arambam Vikash said, "The students' forum was formed on Friday by conglomerating the students' unions of all the colleges in the state to fight for our future as the university remains functionless."

"The third, fourth and the sixth semester (graduate) exams' results have not yet been declared. As a result, students have blindly chosen the honours papers for the fifth semester. It is also hindering the admission process to post-graduate courses," he said.

Vikash blamed the situation on the "incompetence" of vice-chancellor Adya Prasad Pandey, who, he alleged, "fails to think about the students' welfare".

The students, who stormed the chief minister's bungalow, were stopped by police at the gate. Some representatives of the forum were selected and asked to wait for chief minister N. Biren Singh to come.

After unsuccessfully waiting for hours, the students submitted a memorandum to the chief minister, urging him to resolve the present crisis in the university and save the careers of the students.

The university has been paralysed since May 30 when Manipur University Students' Union launched a strike, demanding a replacement for the "irresponsible" vice-chancellor, accusing him of alleged administrative and financial irregularities. The students also accused the vice-chancellor for using his university chamber like a night club.

Vikash said, the impasse at the university has started affecting the careers of the students and held the state and central government responsible. "The state government and the Union HRD ministry should bring a solution in no time. For this, the only solution is removal of the vice-chancellor," Vikash said.

The Democratic Students' Alliance of Manipur (Desam) has also cautioned to launch an intensive agitation from midnight of July 15, if the government fails to solve the issue.

Desam secretary general Shital Oinam said it is very unfortunate that the government is keeping the students' career at bay in order to save the career of an "irresponsible" vice-chancellor.