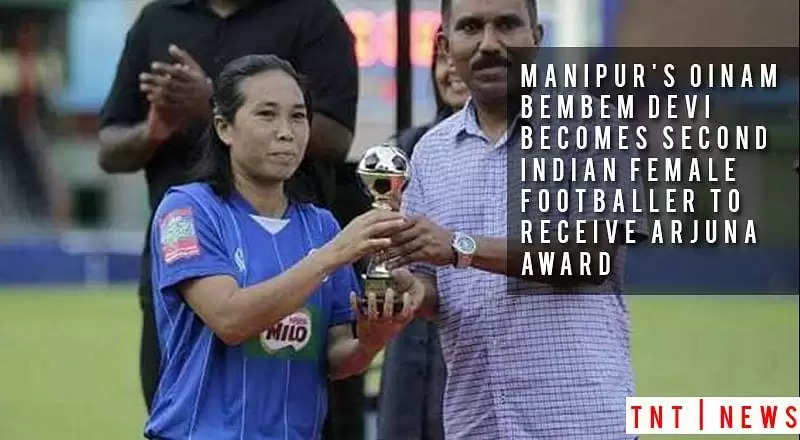 Imphal, August 21, 2017: Indian Female footballer Oinam Bembem Devi brings laurels to the state by becoming the second woman from India to be awarded with the prestigious Arjuna Award. Also Famously known as the 'Durga of Indian Football', Bambem is the 25th footballer to have won the award, the last being Subrata Pal in 2016. In addition, she has also won the AIFF Woman Footballer Award twice, in 2001 and 2013.

According to AIFF's official website, Bembem said after the ceremony, "This is an Award for Indian Women's Football. I hope this Award will help remove the mental block and inspire all girls in the society to take up the sport."

"It gives me immense satisfaction to see my name in the same list with the greatest Indian sportspersons across all fields. My sacrifice over the past two decades has not gone waste.

"I need to thank all teammates, my Coaches, AIFF and the entire Football fraternity along with my family for their support."

Oinam Bembem Devi was nominated by the AIFF alongside the likes of Jeje Lalpekhlua and Gurpreet Singh Sandhu for the coveted Arjuna Award.

Instituted in 1961, the Arjuna Awards recognise outstanding achievement in national sports. Awarded by the Ministry of Youth Affairs and Sports, Government of India, the accolade consists of a cash prize of INR 500,000, a bronze statue of Arjuna and a scroll.

Former national team captain Shanti Mullick was the only female footballer to have won the accolade back in 1983.

Hailing from Manipur, Oinam Devi is popularly regarded as the industrious midfielder who first came into limelight at the national level while playing for Manipur U-13 team at a sub-junior tournament. She subsequently made her debut in the national team at the Asian Women's Championships aged only 15. Donning the No 6 tricolor jersey, Devi was also an integral cog and the mastermind for the nation's victory in five international tournaments.

In an international career spanning almost two decades, Bembem helped India consolidate its place as a regional super-power although opportunities to face quality opponents outside the sub-continent dried out with time. The 37-year-old had also plied her tried in foreign leagues, playing for Maldivian Football club New Radiant and guided them to a historic league win on her debut season.

Earlier this year, she captained the Eastern Sporting Union, which won the inaugural edition of the Indian Women's League.

A top performer over two decades, Devi has made ineffable contributions to Indian Football both on and off the field. Hopefully, her victory will act as a catalyst and inspire the younger generation of footballers as well.

TNT News with inputs from IndiaTimes