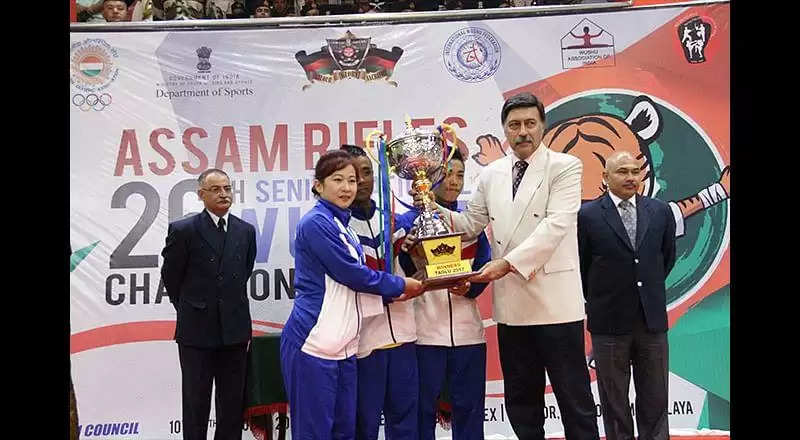 Shillong, Oct 16,2017: Manipur finished at the top of the taolu (form) table while Haryana were first in the sanshou (sparring) events at the Assam Rifles 26th Senior National Wushu Championship, which concluded yesterday.

Services Sports Control Board (SSCB) came second in both taolu and sanshou (68 and 27 points) on a sensational concluding day of the six-day tournament at the Assam Rifles Sports Complex at Laitkor.

Manipur topped taolu with 92 points and Madhya Pradesh were second runners-up with 53. Haryana led sanshou with 31 points while Sashastra Seema Bal (SSB) were third with 20. Teams received 5 points for a gold medal, 3 for silver and 1 for bronze.

"We have witnessed great sportsmanship in this, the first time Assam Rifles has conducted a national event like this," Lt Gen Chauhan said.

He also thanked the Wushu Association of India, North Eastern Council, Government of Meghalaya and the organising committee for enabling a successful tournament.

Governor Prasad, in his speech, congratulated the winners and commiserated with the losers. He added warm words for Assam Rifles, saying that people of India feel safe knowing that the force is guarding them.

In the last 6 bouts, which were the highlight of the final day, World Wushu Championship gold medallist Pooja Kadian of the All India Police Sports Control Board (AIPSCB) cemented her place as the top national female below 75kg fighter with victory in the title match against Vishakha Malik of Uttar Pradesh.

That match and the following 4 ended before the full 3 rounds and it was only in the last bout – men's below 52kg – that the crowd saw one that went the full distance.

Y Jason Singh of Manipur took the first round versus Uchit Sharma (SSCB) but the latter came back stronger in the next two to take the enthralling contest.