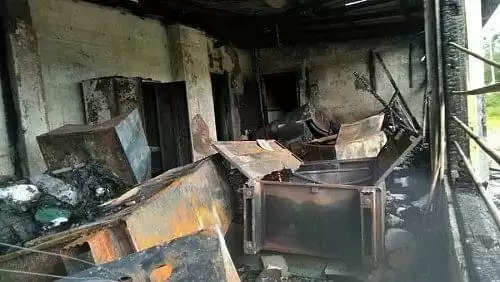 IMPHAL, July 9, 2018: Unidentified men torched the office of the assistant director of sports on the Manipur University campus on Saturday night.

The incident took place in the midst of the Manipur University imbroglio where student bodies have been demanding vice-chancellor Adya Prasad Pandey's ouster.

Manipur University Students' Union (Musu) president M. Dayaman said, "Our strike has been peaceful and we have never been hostile. Last night' arson was an attempt to derail our agitation."

The varsity community has been demanding a replacement of the "irresponsible" vice-chancellor, who has been accused of alleged administrative and financial irregularities among others. The students have also accused the vice-chancellor of using his chamber like a night club.

The sports department office was attached to the varsity's indoor stadium.

Fire tenders doused the flames and prevented it from spreading, but could not save the office and its belongings.

Teachers, the staff and student bodies of Manipur have condemned the "attempt" to burn down the indoor stadium. The varsity community said it was an attempt to derail the agitation demanding the ouster of the vice-chancellor.

Moreover, the MU bodies condemned the assault on students by security personnel when the students were trying to submit a memorandum to chief minister demanding declaration of college semester examination result.

The three bodies held an emergency meeting on Sunday morning to discuss the incident. They also discussed the lapses in the management of university guest house and the misleading statements in the media.

During the discussion, the members reiterated that the members of the university community are fully convergent with the tried, tested and textbook approaches adopted by the powers to derail legitimate, democratic and peaceful movements for justice.

The members also expressed their dismay about unauthorised guests at the university guest house.

They underscored the absence of the registrar-in-charge, joint registrar and the deputy registrar at the scene of the arson after the incident.

Muta spokesperson Devananda Nigthoujam said they are ready to meet the chief minister if he invited them with a concrete plan to resolve the issue.