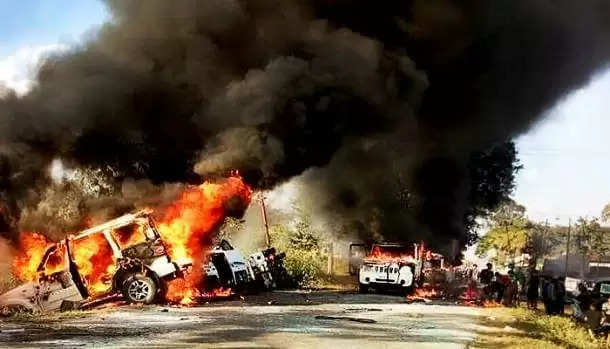 IMPHAL: With the state facing economic blockade for three months, the Manipur BJP stressed on raising a Highway Protection Force for ensuring a 'blockade free Manipur" in days to come, in its vision document.

The party also promised that it is firmly committed to protect Manipur's territorial integrity, culture and its people.

BJP's promise of Highway Protection force comes in the wake of indefinite economic blockade imposed by the United Naga Council (UNC) since November 1, 2016 against the state government's decision to carve off seven new districts in the land-locked state by bifurcating the existing ones.

Supply of essentials, including fuel, to Manipur has been severely hit since November last year after the council declared indefinite economic blockade on NH2 (via Dimapur) and NH 37 (via Jiribam) – the two lifelines to the state.

Apart from raising a Highway protection force for ensuring blockade-free Manipur, the BJP also promised to investigate fake encounter and corruption cases and punish the guilty.

"We will provide one job opportunity to every household of the state. We will give free education to woman till graduation. We will provide housing to all homeless citizens. We will construct all weather four lane roads in every district. We will provide health insurance to all BPL citizens," a BJP leader read out the vision document at the programme.