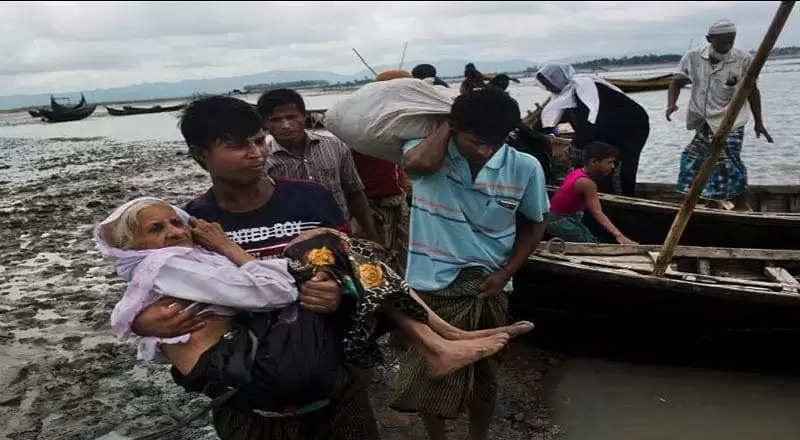 Imphal Sept 23,2017: Chief Minister N. Biren Singh, on Friday, said that stringent security measures have been taken up at the border areas of Manipur, sensing the possibility of a mass influx in the backdrop of the recent large scale violence in Rakhine province of neighbouring Myanmar.
"All possible measures have been set into motion to check influx of illegal immigrant," he said, while speaking at a press conference held in the Chief Minister's Secretariat.

Terming Assam-Jiribam as the most vulnerable point citing the influx of Bangladeshi immigrant, he said that additional forces have been stationed at the border.

"It has been informed that besides the existing check post, another police check post will be set up at Jiribam Mukh and also strengthened the foreigner check post," the Manipur CM said while spelling out the steps taken along the border in the wake of the Rohingyas refugees crisis

"Moreover, house to house drive has been started by the Jiribam police with the help of paramilitary forces since September 13," he added.

Chief Minister Singh also said that 1,211 houses were covered wherein 265 suspicious immigrants have been rounded up and 107 have been pushed back.

Similarly, the drive against illegal immigrants have been strengthened at the Indo-Myanmar border at Moreh by deputing officers.

He further said that the Indo-Myanmar border at Beihang in Churachandpur district would be developed as second corridor in the wake of the Act East Policy adding that a permanent police station would soon be established at Beihang.

He further informed that anyone found violating the ban would be penalized as per the provisions of the Act.

According to Biren, the move was initiated by the state government in order to uphold the primary objective of the Act to conserve wetland and agriculture land, which came into force on September 10, 2014.

He said, "A Cabinet meeting was held with regards to the subject, wherein the gradual diminishing of agricultural land was discussed deliberately," adding, "As per the decision of the Cabinet, an order was passed on September 19 and reaffirming to effectively implement the Conservation Act 2014,"

of the status of the existing paddy land through digitized cadastral maps on the basis of satellite images at the time of the commencement of the Act (in September 10, 2014).