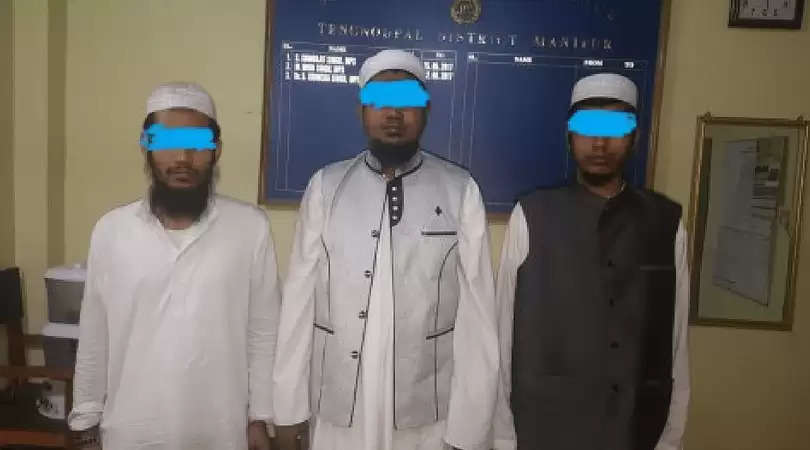 IMPHAL, May 25, 2018: Three Myanmar nationals were arrested by Tengnoupal district police under the supervision of superintendent of police, S. Ibomcha for travelling without valid documents in the state.

As per to police report they were arrested around 5 pom while travelling in an MST bus (registration number MN06B -0501) at Tengnoupal police station's check post after getting a reliable about their movement.

They were travelling with fake Aadhaar Cards which were said to be prepared in Uttar Pradesh (UP).

Police said that Thant Zin Soe was studying at Darool Uloom, UP and has completed a two year course and his fake name and address in the aadhaar card is Asaddullah son of Muhammad of Kollaka Kollam, Kerala.

Thant Zin Tun studied at Jamia Miftahool Uloom, UP and has completed a two year course, his fake name and address in the aadhaar card is Md. Haroon son of Md. Idrees of Moreh.

Aung Thi Ha fake name and address in the addhaar card is Md. Husain of Jaganpur, Faizabad and as per the report he ran away from Meikhtila city to Jammu via Moreh after his house was burnt in a Burmese-Muslim clash in 2013.

Later from Jammu he came to UP in 2014, then met Asaddullah in Darool Uloom and they came together to Imphal and boarded MST bus bound for Moreh.

A case has been registered against them at the Tengnoupal police station.

Meanwhile, it has been informed that as per the order issued by the DGP the erection of drop gate has been set up at Kondong Lairembi and intensified checking and verification of commuters have started.