Manipur | Tallest railway bridge to be completed by 2020 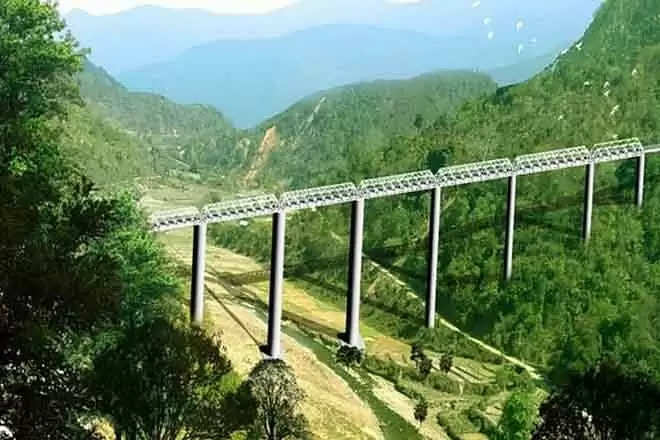 IMPHAL, September 25, 2018: The country's ambitious railway line between Jiribam and Imphal in Manipur, a part of the broad-gauge network of the country, is of national importance and expected to be completed by 2020, said Sai Baba Ankala, the project chief engineer. It would strengthen trade relations with the ASEAN countries and also help in military operations and tourism development, he said.

While delivering a lecture on 'Challenges in Design and Construction of the World's Tallest  Bridge', organised by the Institution of Engineers (India), GITAM Student Chapter, at the Civil Engineering department of the GITAM on Monday, he said that the project was taken up in 2008 and declared as the National Project and the cost of  the complete project is expected to be around Rs 13,809 crore.

Three IITs (Kanpur, Roorkee and Guwahati) are also associated with the Indian Railways project by way of  technical support and proof-checking of designs to make the  bridge cost-efficient and sustainable.

The chief engineer said that the 111-km-long Jiribam-Imphal railway line passed through steep rolling hills of the Patkai region and had to traverse through a number of deep gorges and over several rivers flowing at low ground levels.

As a result, it has been necessary to construct 52 tunnels and 149 bridges crossing 10 stations to maintain a suitable gradient for efficient operation railway services, he added.

He highlighted that as part of the railway project they are constructing a special bridge (bridge no.164) with pillars rising to 141 metres which is the tallest in the world from the point of view of pillar height.

Speaking on the salient features of the project, he said that the construction of a special bridge (bridge no. 164), with pillars rising up to 141 metres, the tallest in the world from the point of view of pillar height, was a challenge.

The bridge was also located in seismic zone-v and in view of this all precautions, particularly a site-specific design spectrum, had been developed to ensure long-term stability of the bridge. To ensure safety, the works are under surveillance through CCTVs, drone cameras and remote monitoring.