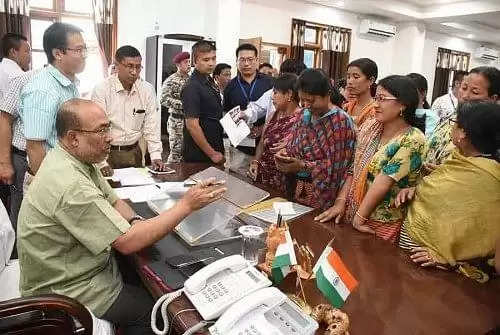 IMPHAL, May 24, 2018: Chief minister, Nongthombam Biren Singh on Wednesday announced that the state government will remove Common Service Centres (CSC) as access points to provide Aadhaar-related services throughout the state and instead government-recognised agencies will be given the authority to enroll and issue Aadhaar cards.

The chief minister made the announcement at the sidelines of Meeyamgi Numit held on Wednesday at the secretariat.

Biren informed that a special check-post with gates will be installed at all entry points of the state at Mao, Jiribam, Behiang and Moreh to check influx of migrants, acknowledging the menace as one of the prevailing issues of the state.

He cautioned that if any illegal immigrant gets caught under the jurisdiction of a certain police station, then all the concerned officers of the particular police station would face stringent action for giving passage to immigrants.

He further clarified that immigrants who possess valid identification documents are free to travel in the state. He also urged the people not to give rent to unknown tenants without proper verification of identity. "We will be at stake if our own people are engaged in such illegal activities," he added.

The chief minister tended to as many as 780 complaints and met around 2500 people personally on Wednesday's Meeyamgi Numit (People's Day).

Further responding to query on failure to take action for those grievances expressed at Meeyamgi Numit, he said that a monitoring cell has been installed to keep track of actions initiated at his office.

The cell would inform the complainants about their complaints from time to time by sending SMS to their contact numbers, he added.

He also said that his officials should welcome the people and treat his directions made through Meeyamgi Numit as usual official work.

Biren also lauded the government employees for their sincerity and commitment in discharging their duties. They have worked really hard and understood government's vision to work at grass root level, he added.