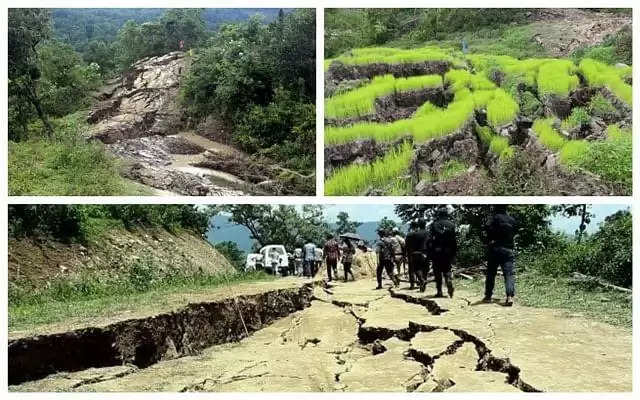 IMPHAL, June 14 2017: The Kangpokpi district magistrate has clamped prohibitory orders under Section 144 CrPC after massive earth cracks developed at Kalikhola village in the district.
Issued by district magistrateT Ranjit Singh, the order prohibited the assembly of five or more people and the entry of any person in the affected village and areas located within a radius of 1 km from the village.
The order came into effect from 7pm on Saturday, said the order, whose copies were sent to the media by Manipur information and public relations department on Monday.Kalikhola, a Nepali village, initially witnessed the fissures on June 4.
The cracks widened and multiplied there, damaging over 15 of the total 30 houses, forcing the affected villagers to take shelter at the nearby Toribari village along IT road. Geologists and environmentalists are currently examining the landslides at the village.