Manipur: Protest staged by meira paibies against arrest of Erendro 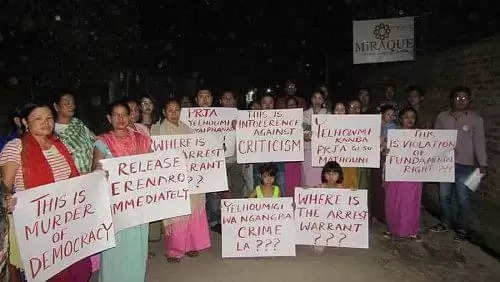 Speaking to media persons, one of the protesters said that Erendro had replied to the viral video of some non-locals who were voicing communal threats. She further said that he expressed his opinions under right to freedom of speech and that the state government should instead arrest the non-locals for making the hate video. If he is arrested for stating his opinion, then Erendro must be released immediately without any condition, she added.

Protesters demonstrated placards that read "Release Erendro immediately", "This is violation of fundamental rights", "This is intolerance against criticism", "This is political persecution" and several others.

According to a police report, Erendro was charged under section (I53-A/153-B/505/506/511 IPC and 84-C IT Act) for promoting enmity between different groups, criminal intimidation.

Erendro was later remanded to police custody till May 28.