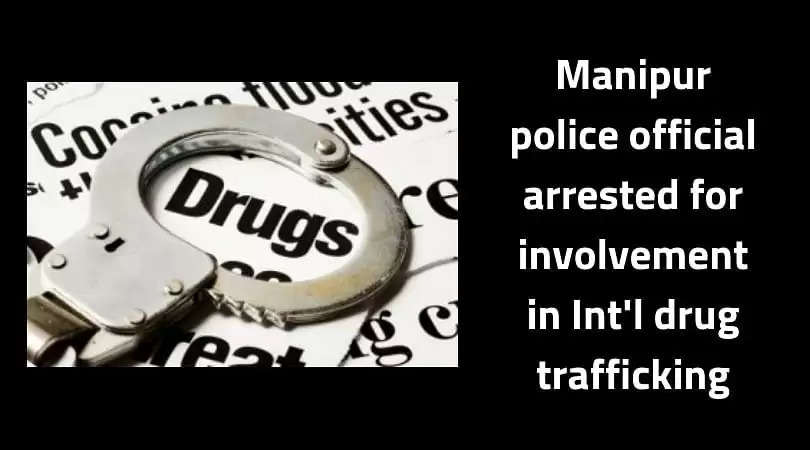 Manipur deputy superintendent of police (DSP) has been arrested for his involvement in trafficking 2 kilos of brown sugar worth 2.4 crore in the international market.

The Narcotics and Affairs of Border (NAB), police arrested a deputy superintendent of police (DSP), currently serving in SIT unit Manipur police. The accused has been identified as Takhellambam Bangkabihari, 55, son of (L) T. Amuba Singh of of Uripok Achom Leikai.

A statement issued by superintendent of police/NAB PRO, W. Basu, Bangkabihari was arrested on early morning today at 5: 15 am from his Uripok residence, said. Sources from the NAB informed that the investigation was led by Thounaojam Brinda additional SP NAB, the first woman narcotic officer to be conferred with a gallantary award of Manipur Chief Minister's Police Medal.

A report in Imphal Free Press stated that the DSP was arrested following disclosure of one, Khumujam Robindro, 46, who was arrested by NAB on October 28 with two kilos of Heroin brown sugar from Konung Mamang in Imphal East. Robindro is a resident of Mayang Imphal Konchak Makha Leikai, Imphal West.

The statement stated that during the course of investigation, Robindro who is now in judicial custody disclosed that he received information that his friend Bangkabihari has some kilos of heroin brown sugar with him at Jiribam Police station, said the release. It is learnt that Bangkabihari was also posted as the officer-incharge of Jiribam Police station at the Manipur-Assam border.

After several round meetings at Jiribam and Imphal, between the two accused, Bangkabihari brought two kilos of the brown sugar and delivered to Robindro at his residence on October 16 for disposal, the release added.

He was arrested from his residence during a cordon and search operation that was conducted on Tuesday acting on an information of presence of some cadres of UNLF loitering in the Keibi area.

It said Shantikumar revealed that he had threatened to assault and kill the surrendered cadres of underground outfits and their family on the advice of self-styled chief of army Pambeiba of ULNF.

A case has been registered at Sagolmang Police station and investigation is going on, said the release.