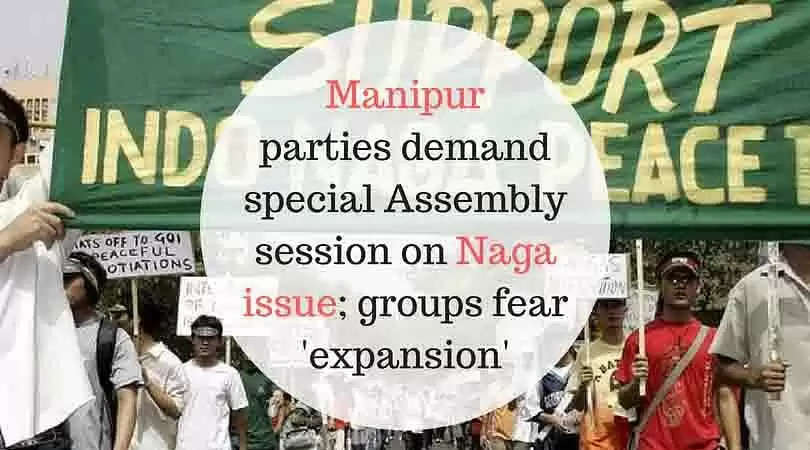 IMPHAL, July 23, 2018: All political parties of Manipur, barring the Congress, on Sunday demanded a special session of the Legislative Assembly be convened to discuss the framework agreement reportedly signed by the Centre and the National Socialist Council of Nagaland in 2015.

According to media reports, the interlocutor for the Naga talks R N Ravi informed a Parliamentary panel on Thursday that it signed a framework agreement with the National Socialist Council of Nagaland-Isak-Muivah (NSCN-IM) after it agreed on a settlement within the Indian federation with a "special status."

Ravi had reportedly told the panel that the government called it a framework agreement and signed it.

"At the meeting today at the Chief Minister's Office, it was decided that the Centre's framework agreement on the Naga issue should not infringe on the territorial integrity of Manipur," L Sotin Kumar Singh, state Secretary of CPI, told PTI.

On the Indo-Myanmar border issue, he said that it was decided that all political parties of Manipur would join the Ministry of External Affairs (MEA) team which will visit the disputed border pillar No. 81 at Kwatha village of Tengnoupal district of Manipur on July 25.

"The MEA team will inspect the disputed site to figure out if the border post was installed in the right place," Sotin Kumar said.

The Congress abstained from the meeting as it felt the way the things were dealt with was not proper, Sotin Kumar added.

In all, 17 parties took part in the meeting on Sunday.

On the other hand, The All Manipur United Clubs' Organisation (Amuco), Committee of Civil Societies Kangleipak (CCSK) and the United Committee Manipur (UCM) have opposed details shared by the Centre's interlocutor for Naga peace process R.N. Ravi to settle the Indo-Naga peace talks providing a "special status" according to Article 371 (A) of the Constitution.

AMUCO president Ph. Deban Sharma said the implementation of Article 371 (A) in the state is almost similar to the formation of a "separate Naga council" in the state or a "state within the state" which is totally against the wishes of the people of Manipur.

UCM president Sunil Karam added that they had made it clear to Modi and Rajnath in a meeting on December 2017 that any autonomous territorial council, pan-Naga cultural body, regional council or any division based on ethnicity would not be tolerated.