Manipur | Night curfew imposed at Indo-Myanmar border; ‘No hasty decisions to be made on pillar issue’, says CM 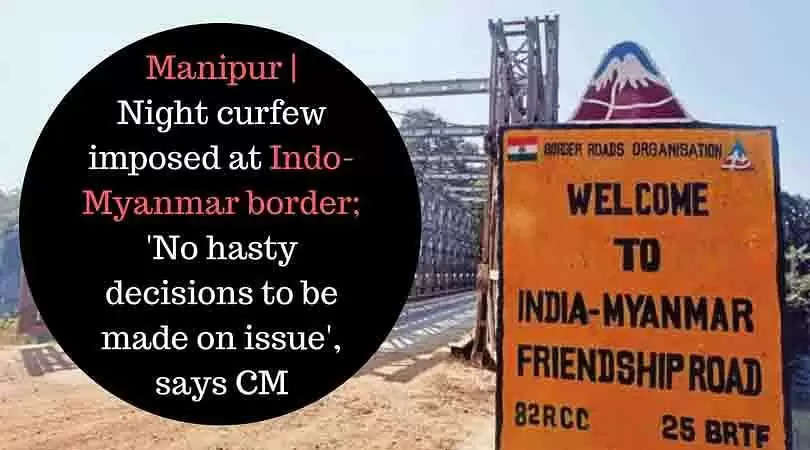 IMPHAL, July 8, 2018: Prohibitory orders were imposed in some areas of Moreh sub-division in Manipur on Saturday after unrest over the alleged shifting of a border pillar along the India-Myanmar border. The border pillar was shifted well into the Indian territory.

Tengnoupal District Magistrate A Tombikanta ordered imposition of prohibitory orders under Section 144 of Criminal Procedure Code during the night hours for the next six months in some parts of the sub-division.

The orders prohibit assembly of five or more people from 7 pm to 4 am and carrying any weapon.

It was imposed after rising tension in the area over "shifting" of border pillar No 81 three kilometres inside the Indian territory, officials said.

The move comes a day after a visit by the Manipur Revenue Minister Karam Shyam to the area where he said a high power committee on border pillars would submit a detailed report to the government on the contested pillar.

The border pillar was erected in 1969-70, the minister had said.

The residents of Kwatha Khunou had flagged the issue last month, alleging encroachment. Their claim was supported by several social bodies and political parties.

Chief minister, N. Biren Singh on Saturday said the issue of Indo-Myanmar Border Pillar No. 81 should be sorted out by discussing it at a proper forum as it is a matter involving two countries.

Singh said "No Manipuri would want to lose any piece of land but no decision can be taken hastily as it is a very sensitive issue", he added.

There is no reason to panic as the state government is committed to facilitate solving the problem amicably, assured the chief minister.

Biren was at the inauguration ceremony of Shija Expands for Technology, Safety, Volume, Vision and Value System at the complex of Shija Hospitals and Research Institute, Langol in Imphal West.

TNT News with inputs from PTI