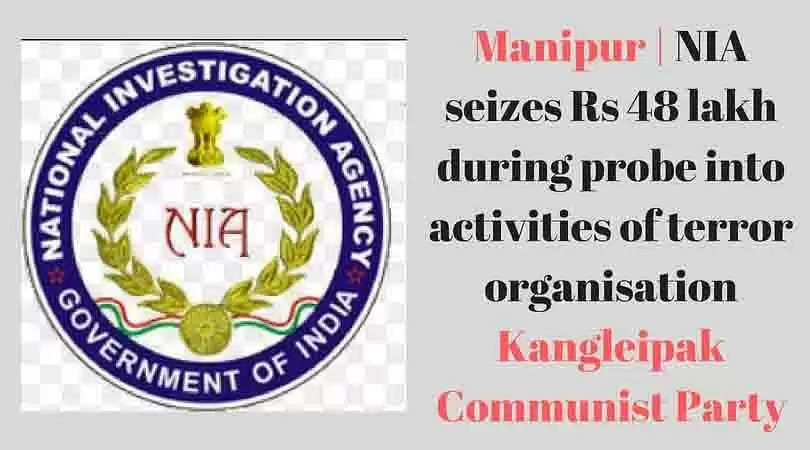 IMPHAL, September 1, 2018: The National Investigation Agency (NIA) has seized Rs 48 lakh in cash from a woman during an investigation into the activities of proscribed terrorist organisation Kangleipak Communist Party (KCP).

The agency is investigating the March 2017 case under Section 120B of the Indian Penal Code (IPC) and Section 20 of Unlawful Activities (Prevention) Act relating to the activities of the organisation.

The money was seized from K Pramodini, an employee of RIMS Imphal Manipur. It was produced by Pramodini in the presence of independent witnesses. The amount belongs to N Sobita Devi, wife of accused Dr Mutum Shyamo Singh (Ex Director JNIMS Hospital, Imphal).

The NIA found out that the amount was handed over to Pramodini by Sobita Devi for the purpose of concealing the terror funds which were collected by Mutum Shyamo Singh as part of his activities in support of proscribed organisation KCP. NIA had arrested Mutum Shyamo Singh on 6 July, for his active involvement in KCP. Search was conducted at that time in his house and Rs 40.03 lakh in new currency and Rs 1 lakh in old currency were also seized as proceeds of terrorism.

During the investigation of this case, accused persons Khoirom Ranjit Singh, commander in chief of KCP, and his associates — Irungbam Sanatombi Devi and P Prem Kumar Meitei — had been arrested and chargesheet was filed on 10 July last year before the NIA Special Court in Delhi. A supplementary charge sheet against Sanabam Inaobi Singh has also been filed in the instant case on 24 May.

Further investigation in the case under Section 173(8) of Code of Criminal Procedure (CrPC) is continuing.