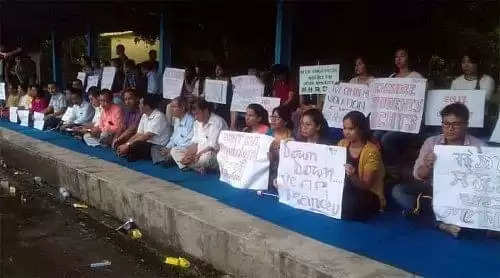 IMPHAL, June 24, 2018: Manipur University Students' Union (MUSU) had denied the invitation of chief minister, N. Biren, for a talk over the issue of the Manipur University's vice-chancellor, Adya Prasad Pandey.

According to MUSU, they denied the invitation as the chief minister does not have the power to remove the vice-chancellor, since it is out of his jurisdiction.

Meanwhile the student's body continued their agitation of demanding removal of the varsity's vice-chancellor by staging a sit-in protest in the varsity's campus.

The three bodies had also decided to joint hand in the agitation of demanding removal of the vice-chancellor.

Briefing media persons, MUSU president, Mayanglambam Dayaman said the bodies condemn the irresponsible act of the HRD joint secretary for asking the chief minister of the state to deal the issue by the state government.

During yesterday's meeting with the joint secretary, he has admitted that more than 50 percent of the allegation against the vice-chancellor is true, he added.

The joint secretary later stated that he will consult the matter with the HRD secretary to bring an amicable solution, he added.

Mentioning that the ultimatum which served before five days has reached its deadline today, Dayaman said, "MUSU will intensify their agitation from tomorrow and will never retreat until the vice-chancellor is removed."

In the meanwhile supporting the agitation against the vice-chancellor, volunteers of Local Surrounding People of Manipur University, Canchipur (LSPOMUC), Social Young Club-Kakwa and Sorokhaibam Youth Development Association staged a sit-in-protest at Kakwa Keithel.

Co-convenor of LSPOMUC, Nando Singh said in order to protect the younger generation and the carrier of the students, the vice-chancellor of the varsity should be removed from his post at the earliest.

He asserted, "Our ancestors had provided land for the university, promoting the establishment of the institution expecting a splendid educational corner but on the contrary the irresponsible and corrupted act causes famine in the academic atmosphere of the varsity."

Charging that since the day A.P. Pandey has been appointed as the vice-chancellor, the varsity is gradually down falling, he said appointing an unfit vice-chancellor in the only central university of the state also clearly shows that the Centre's 'careless attitude' towards the state.

Regarding the issue a consultative meeting will be conducted on 29 June and it will be attended by all the political parties, stakeholders, CSOs, student's bodies and others to take up appropriate action for removal of the vice-chancellor.

The bodies have warned to take up various forms of agitation such as public curfew and general strike if the authority stills fails to remove the vice-chancellor from his post.