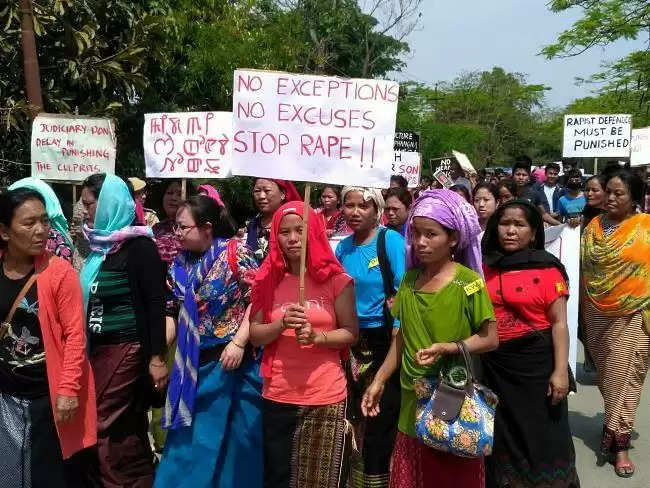 IMPHAL Apr28:A massive rally was carried out yesterday in Imphal against alleged gang-rape incident of two girls by a group of boys in Imphal on April 14. .

Holding placards and shouting slogans, a large number of people marched in Imphal from Ima Khunthok-nganbi in DM College campus and passed through Khoyathong, Dingku Road, Lamlong and Minuthong and finally conglomerating at Ima Khunthok-nganbi for a public meeting.

Among others, the rallyists demanded delivery of justice to the victims at the earliest. The rally was organised by the "Core Committee of Phaknung Gangrape of 2 Minor Girls."

Leaders of various organisations spoke on the occasion demanding that the State Government should waste no more time to deliver justice.

The incident took place on April 14 when four students, two boys and two girls, were travelling on motorcycles around Imphal East to witness a cultural event.

They were way laid by some miscreants who took them to a secluded place to commit the crime.  The two boys were also reportedly thrashed by the perpetrators when they tried to protect the girls.

Several youths have been arrested by the police in connection with the incident. Full interrogations are said to be underway.

Few days ago, some protestors had expressed the need to start intense education on the social ills such as rape beyond the class room. They protestors also opined that elders in the family should start educating on such ills of the society.