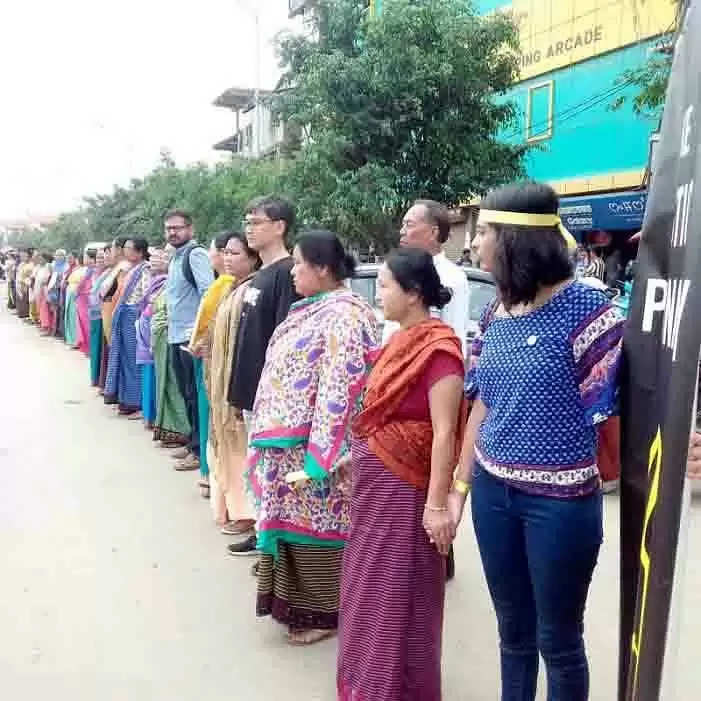 IMPHAL, June 18, 2018: Hundreds of people, most of them women, carried out a campaign on Saturday in the heart of Imphal to show solidarity to human rights defenders/activists. With yellow bands in their heads and arms, the people formed long human chains saying they were showing solidarity to the human rights defenders/activists and also seeking justice to the "fake encounter" cases.

Saturday's event was a part of the week-long "Brave" campaign globally launched by Amnesty International "to strengthen the recognition and protection of human rights defenders around the world" sometimes ago. For Manipur, the campaign was launched on June 11.

In Manipur, the campaign is being organized by Amnesty International India, Human Right's Alert (HRA) and Extra-Judicial Execution Victims Association Manipur (EEVFAM) in collaboration with women vendors of Ima Keithel (women's market in the heart of Imphal).

The human chains formed along the BT roadside were carried out from 1.30 pm to 2 pm. They also distributed leaflets to the people seeking their supports in the campaign. The leaflet reads, "1528 people have lost their lives in extrajudicial executions… Now their friends and families are seeking justice… For this, they are threatened, harassed and attacked…Stand up for these brave people…Support them …"

Speaking to media persons, Nikita Banerjee, a researcher of Amnesty International India, said that Amnesty Internal has launched the weeklong campaign "Brave" from June 11 which will culminate on June 17.

"Members of Extra-Judicial Execution Victims' Family Association, Manipur (EEVFAM) have been demanding justice for the 1528 extra-judicial execution cases in Manipur despite of facing threats, intimidations and attacks from certain quarters", Nikita said. She added that the human chains to show solidarity to the human rights defenders and to let the authorities know that human rights defenders should be protected", shefurther said.

Nikita then maintained that they are waiting and watching on the CBI's investigation on the "fake encounter cases".

Babloo Loitongbam, Executive Director of Human Rights Alert (HRA) said that the Supreme Court of India has ordered the CBI to expedite the investigation of the fake encounter cases and complete it by the month of June. The next hearing has been scheduled on July 3, he stated. "We hope that the court will bring some justice during the hearing," Babloo expressed.

TNT with inputs from Morung Express