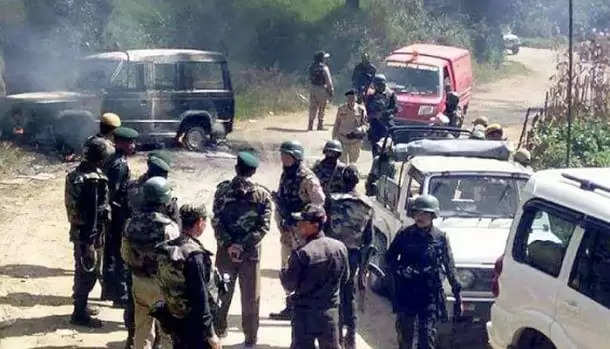 IMPHAL: The Manipur High Court issued a stern warning to secretaries of the central government to comply with the court directives or face action.

A full bench, comprising Chief Justice Rakesh Ranjan Prasad, Justices N. Koteswor and K. Nobin, said that from time to time directives have been issued on remedial measures to handle the economic blockade. These should be complied with or the court will "fix responsibility".

The United Naga Council (UNC)-imposed blockade in Manipur to protest against the creation of new districts has been in force since November 1.

The bench directed: "There should be at least 100 oil tankers in each trip of highway convoys. While 50 tankers should bring petrol, the rest should be carrying kerosene and diesel. These should be transported four times a week."

Besides, the high court also instructed to bring consumer goods and to rein in prices. The highways should also be repaired and maintained well by the authorities and action-taken report should be submitted to the court on February 7.

"The Secretaries of the Surface Transport, Defence and Home ministries should be notified and in case of failure to comply with the instructions, responsibility will be fixed," it ruled.

The high court further directed the Advocate General of Manipur to ensure that the office-bearers of the UNC make a personal appearance in the court on February 7.

Gaidon Kamei and S. Stephen, President and Publicity Secretary, respectively, of the UNC were arrested on November 25 and have been in custody.

However, A. Noutuneswori, the Chief Judicial Magistrate, Imphal East, has permitted both of them to take part in the tripartite talks slated to be held in Delhi on February 3.

Sources said that the state intelligence agencies has made the list of the office-bearers of the UNC available to the Advocate General.

Manipur has been facing acute scarcity of all items on account of the blockade.