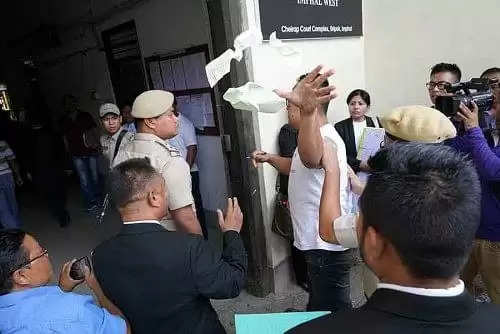 IMPHAL, May 29, 2018: "If need be, I will go to jail a hundred times. They cannot gag me, my arrest is a clear act of political prosecution but I will not be deterred," Erendro Laichonbam told reporters at the Imphal West CJM court on Monday.

Erendro and six other individuals were brought to court by the police praying for a 15-day police remand. They were arrested on charges of sharing a communally-charged hate video on Facebook. Among the arrested is a rifleman of the Indian Reserve Battalion (IRB). Except Erendro, all of the six applied for bail and was released by the magistrate on Monday.

At a press conference on May 25, the police revealed that six individuals were arrested in connection with the video. The police did not reveal the identities of the arrested persons and have not still so far. It was learnt from public documents at court that the individuals are Suresh Maisnam, 33, from Kangmong, Naresh Gurung, 27, from Pangei, Rohit Das, 29, from Serou, Rinku Das, 32, from Khuyathong, Kishan Mallik, 26, from Churachandpur, Tongbram Meghachandra, 43, from Napet Palli and Erendro Laichonbam, 37, from Thangmeiband . Another person identified as Laishram Achouba Singh, 43, of Nagamapal was released on bail earlier on health grounds.

All of the arrested were charged under various sections of the IT Act amounting to criminal intimidation, promoting enmity between different groups on religion, race, place of birth, residence, language etc. which are prejudicial to the maintenance of harmony.

Police investigations have revealed that the video was made by one Rupesh alias Babua Thakur, 26, son of Sanjay Thakur of Parora village, Begusarai district of Bihar. Babua used to run a small shop at Churachandpur district and knew Manipuri. The hate video was uploaded from Bihar by Babua to a Whatsapp group called Serou Bengali Community Group. The main culprit involved in making the video are still not arrested. Yet, the police prayer was to remand the arrested persons for 'further inquiry.'

At the court proceedings, magistrate, L Tonsing heard the prosecution and the defence counsel. Public Resurgence and Justice Alliance (PRJA) convenor, Erendro Laichonbam decided to represent himself. In his submission, he said, "I feel that I am not guilty and more that I am doing a service to the public. I am the leader of a regional political party and have been acting as an opposition to the BJP government, my arrest is a political prosecution," adding that he only put up the video to warn the public and for the perpetrators to be punished.

It may be mentioned that only Tongbram Meghachandra Meeitei and Erendro Laichonbam have been arrested made for sharing the video on Facebook. The others were arrested following investigations on who originally uploaded the video in the first place.

The public prosecutor in his submission, while pointing out a flaw within the IT Act said that there are not many provisions for arrest of a person for sharing objectionable content online as 66A of the Act has been struck down by the Supreme Court. (This section had been widely misused by police in various states to arrest innocent persons for posting comments that criticise social and political issues and political leaders on social networking sites).

While deliberating on this issue with the magistrate, the public prosecutor reportedly mentioned chief minister Biren Singh, stating that the CM publicly commented that guilty persons should be arrested. Sections from the legal community mentioned that it was uncalled for.

Erendro's supporters shouted slogans at the court premises on Monday demanding his release. Despite having been given bail approval, Erendro stood on grounds of unconditional release, "Long Live Manipur," he shouted from the prisoner van before being taken to jail.