Manipur | Cops take out rally to protest against mob violence 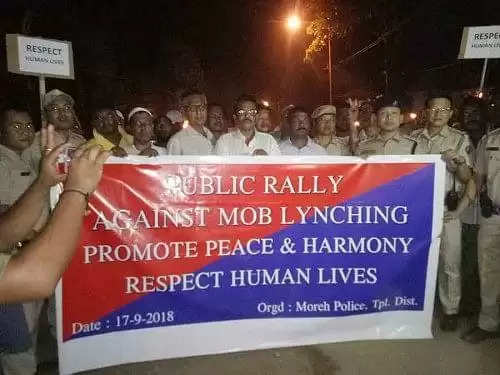 IMPHAL, September 19, 2018: The Manipur Police Monday took out a rally from Moreh to Tengnoupal, along the India-Myanmar border, to protest incidents of mob violence in the state.

The "men in uniform", numbering around 70 and led by Tengnoupal Superintendent of Police S Ibombcha Singh, was joined in by more than 500 volunteers of various civil bodies.

"The two-km peace rally – from Moreh police station to Tengnoupal district headquarters – was taken out to generate awareness about the need for maintenance of law and order in the society," Ibomcha Singh told PTI.

A civil official, who did not wish to be named, said the peace rally was the first of its kind in the state.

The rally came four days after a 26-year-old man was lynched by an irate mob at Tharoijam area of Imphal West district on suspicion of being a vehicle lifter. Local people had also set afire a car believed to have been used by "two of his associates".

Five persons, including a havildar of India Reserve Battalion, have been arrested. The purported video of the incident, which went viral on social media, showed that the four police personnel, including a sub-inspector, were "present at the spot when the victim was alive and lying unattended", Imphal West SP Jogeshwar Haobijam had said.

While the sub-inspector was suspended, three other officers were terminated from their services.