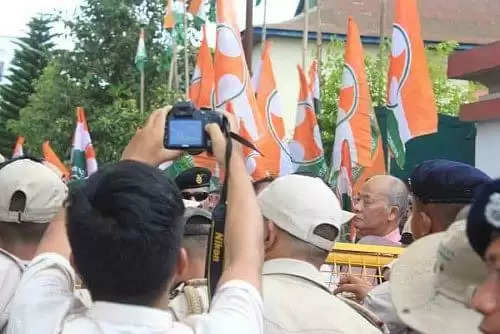 IMPHAL, August 10, 2018: Police on Thursday foiled a Congress procession to offer floral tributes to the statue of Mahatma Gandhi on the 76th anniversary of Quit India movement.

Prohibitory orders are in force in Imphal East and Imphal West districts, police said, adding the procession was stopped because the organizers had not sought permission.

Ibobi said the Congress members were planning a walk for about 500 metres from the party office.

He termed the police crackdown as unwarranted. "The BJP-led governments at the Centre and Manipur are functioning like dictators", he said, adding "denying us passage is murder of democracy."

Later the Congress members offered floral tributes to the Mahatma within the party office compound.