Manipur CM declares war on drugs in the state 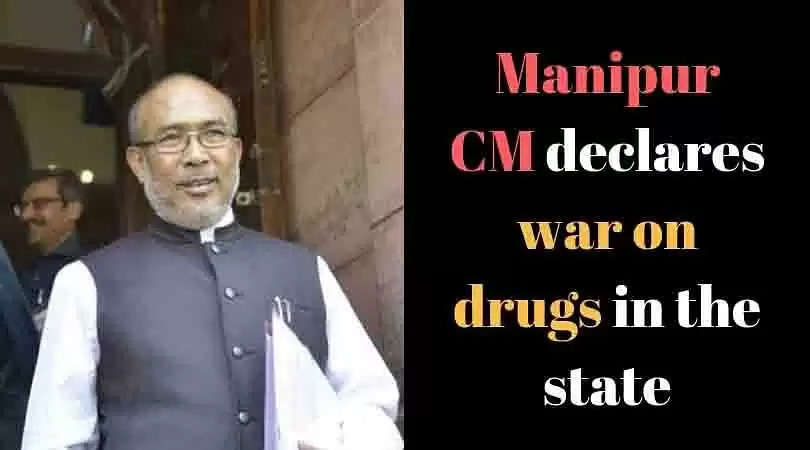 IMPHAL, November 3, 2018: The Manipur government has declared a war on drugs affecting a significant number of people in the state, Chief Minister N Biren Singh has said.

The state government and the security forces have initiated projects to wean away drug users from the addiction while initiating strict action against drug peddlers, he said.

The chief minister said 600 peddlers were arrested this year and fast track courts have been set up to try the accused persons.

The Northeastern state, which is close to the Golden Triangle in Southeast Asia — infamous for drug trafficking, has been affected by drug usage and a large number of HIV cases owing to intravenous drug usage.

"Thousands of hectares of land are used for poppy cultivation in areas near the international border with Myanmar," Singh told a group of visiting newspersons.

He said the poppy is exported to other countries via the Golden Triangle.

"We are taking help of the Army and Assam Rifles to root out the cultivation of poppy in Manipur," the chief minister said adding that the poppy growers are being rehabilitated with lemongrass cultivation.

"The happy news is people are getting involved in countering drug peddling," Singh said.

He said at Lilong in Thoubal district, drug peddlars were captured and the seized drugs were burnt.

The All Lilong Anti-Drug Association (ALADA) has helped in recovering drugs worth over Rs 6 crore since it was set up in July 2017, its tribe secretary Abid Hussain claimed.

He said while drugs like spasmoproxival, N10 come from within the country, heroin and World is Yours (WY) are brought in from Myanmar by the peddlers.

"These drugs are widely used in Manipur and other states in the northeast," Hussain said.

Very poor economic condition, lack of job opportunities and easy availability of drugs lead to the high number of drug addicts, he said.

At Lilong, which has a one-lakh population, the ALADA has identified 2,000 users though the actual number may be higher, he said.

Sister Veronica, who runs rehabilitation centre 'Sneha' for women drug addicts, said there are 11 women at present at its residential facility.

Lalboi, a poppy cultivator from Joupi village in the southern part of the state, said during an interaction with PTI at Kakchin town that he along with many others in and around his village were engaged in this for sustenance.

Stating that there are around 150 poppy cultivators in his area, he said: "Assam Rifles is helping us with seeds and knowhow in cultivating lemongrass so that we give up cultivation of poppy."

"It will take three to four years before we reap benefits from the cultivation of lemongrass," the 32-year-old man with a family of five, said.

Lemongrass is a fragrant tropical grass which yields an oil that smells of lemon and is widely used in Asian cooking and in perfumery and medicine.