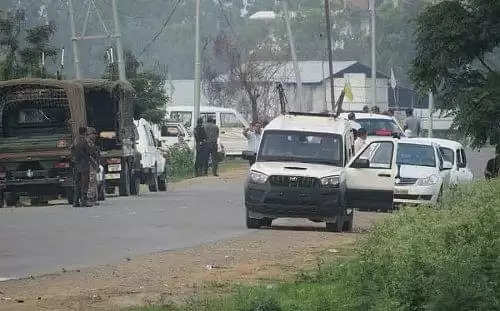 IMPHAL, June 4, 2018: The infamous Malom massacre that occurred at Boroi Makhong, Malom Tulihal Makha on November 2, 2000, was re-enacted on Saturday by a team of Central Forensic Science Laboratory (CFSL) of Central Bureau of Investigation (CBI), New Delhi as a part of the ongoing investigations for the alleged cases of extra judicial killings in the state.

The investigations affected commuters on the national highway 150 for several hours in the morning.

It may be recalled that during the incident that happened 18 years ago, ten civilians who were waiting at the bus stop on the eventful day, were allegedly shot down by personnel of 8th Assam Rifles after a bomb blast had occurred in the nearby area.

After the Supreme Court's order issued on July 14, 2017, a special investigation team consisting of five members of Central Bureau of Investigation was formed to investigate the infamous Malom Massacre.

The investigation started at 6.30 am and was conducted for around one hour. The scene was reconstructed as a part of the investigation into the cases of extra judicial killings in the state.

According to an order released by district magistrate, Imphal West, restriction was kept along the national highway where no one directly involved in the case were allowed to pass through. Police blocked the highway from Malom Oil Depot to Nambol police station which affected the commuters.

As per the direction given by the Supreme Court, the SIT of CBI had registered fifty-five different FIRs in connection with the alleged fake encounter cases.

The apex court had also asked the director of CBI to lodge the necessary FIRs and complete the investigation by December last year. However, after going through the agency's status report, the Supreme Court ordered for filing 30 more FIRs in addition to the 12 cases already filed by the CBI, on January 16, 2018.

It can be mentioned that one Leisangbam Ibetomi, 62, and Sinam Chandramani, 18, a 1988 National Child Bravery Award winner were included among the ten who were allegedly shot down in the massacre.

In relation to the incident, Irom Sharmila started her 16 year long, fast unto death protest on November 5, 2000 demanding that the Armed Forces Special Power Act 1957 must be repealed and ended the fast on August 9, 2016.

It was held in collaboration with family members of victims and youths of the Heirangoithong massacre. In March 14, 1984, a total of 14 civilians were killed and 31 injured when CRPF personnel fired indiscriminately at a crowd watching a volleyball match at Heirangoithong Volleyball Ground.

Family members prayed that the investigation taken up by Central Bureau of Investigation in 1528 cases be charge sheeted at the earliest so that investigations can be done in its truest sense and repeal AFSPA from the state.

In a press statement, president of YACPIP, L. Gulshan said the committee has been pressurising the CBI to investigate the fake encounter cases in a correct manner. The press statement also informed that the campaign will be strengthened in the coming days.