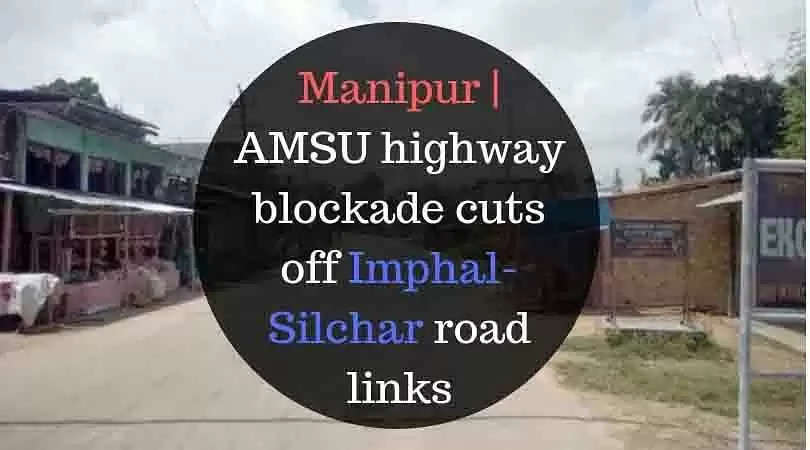 IMPHAL, September 11, 2018: The 100-hour total blockade imposed by the All Manipur Students' Union (Amsu) along National Highway 37 seeking to flush out NSCN (Isak-Muivah) camps from Manipur, has cut off connectivity with Imphal and Silchar.

Hundreds of vehicles were stranded at both ends of the Imphal-Jiribam road that connects Silchar. The blockade began on Saturday midnight.

While demanding the state and central governments to arrest the self- identified members of NSCN-IM who physically assaulted members of AMSU at Nungba on September 3, president of AMSU district Committee, Jiribam, Yurembam Sanjiv Singh also called upon the public not to use any means of transport during the blockade while adding that in the case of failure to do so, the person(s) will have to bear individual responsibility.

"We have our volunteers blocking traffic along the highway at Cotland, Keithelmanbi, Khumbong, Lakhipur, Gulathor and Babupara. Transport in connections with religious activities and medical care are exempted," said Manjit Sarangthem, the president of the students' union. Our volunteers will not damage any vehicle or harass anyone on the highway, he added.

"Four cadres, including two masked men, slapped our secretary general and extorted Rs 5,000 from them, alleging that the team was travelling in the 'Nagaland area', which in fact was in Manipur," said Sarangthem.

"We will intensify our protest if the cadres involved in the incident are not arrested within this 100-hour blockade. Why can't the state arrest the culprits who harassed our members at Nungba Bazar, which is near the Nungba police station? The NSCN (I-M) cadres at Nungba operate in the open uninterrupted by security forces," alleged Sarangthem.

He was reacting to the statement of chief minister N. Biren Singh who on Saturday said he had ordered the arrest of the culprits.

The chief minister appealed to the students to withdraw the blockade adding that it was only matter of time and that arresting militants hiding in jungles was not an easy task.

It was a matter of grave concern that the state government was unable to nab those cadres involved in the September 3 incident, Sarangthem added.

He said the Nungba incident was not the first incident of looting and harassing travellers along the national highways. Many have lost their lives in Manipur at the hands of the rebels in connection with extortion.

He slammed the state government for remaining silent though the rebels have been committing all kinds of excesses, including rampant extortion. He asked since the cease fire between the NSCN (I-M) and the Centre does not exist in Manipur, why was the government allowing the outfit to operate in the state?

He said NSCN (I-M) has been working consistently to create distrust and animosity among indigenous communities of the state.

The Rongmei Luh Phuam (Luangba Luangrian) has demanded the immediate end to the 100-hour blockade, else there would be a counter-indefinite blockade along the national highway.

A press release issued by its general secretary Ajin Kamei alleged that the students' union failed to stick to student-related issues and instead chose to propagate communalism, hatred and chaos.

Civil society organisations and students' organisations, including AAMSU, extended their support to the blockade.

The Committee of Political Parties, a group of 10 parties, had also urged the Manipur government to root out the NSCN (I-M) rebels from the state.