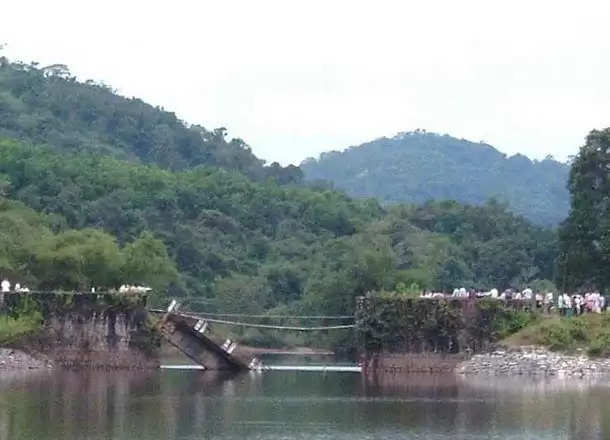 IMPHAL, July 17: In less than a week after 4 people were killed after a bridge collapsed at Dimapur in Nagaland, fears amongst the people over the conditions of the bridges across the state has only given rise to speculations.

In one such case, a speculation turned into a reality when a crucial Barak bridge located along the National Highway-102 collapsed on Monday morning, cutting off land-locked Manipur from rest of the country, an official said.

The bridge collapsed when a 10-wheeler goods-laden truck was passing through it, a transport department official said, adding that the structure was in a fragile condition since last night.

This has left around 200 goods-laden trucks coming from Jiribam town to Imphal stranded. Repairing works are being carried out on war-footing, the official said.

The Barak bridge is located along the Imphal-Jiribam highway and passes through the hill district of Tamenglong.

The highway, considered as the second lifeline of the border state, assumed greater importance after a massive landslide at Viswema in neighbouring Nagaland cut off the major Imphal-Dimapur national highway.