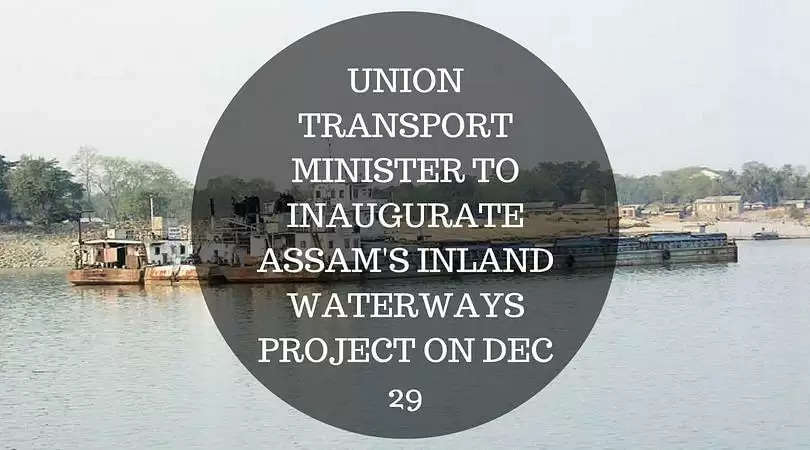 By Our Correspondent, TNT News | Guwahati, Dec 28, 2017:
Union Minister of shipping and road transport Nitin Gadkari will flag off the first movement of cement cargo through National Waterways 2 between Dhubri and Sadiya on the river Brahmaputra in Assam  on Friday under the Centre's flagship program Sagarmala.
Two barges, each having 200 metric ton capacity will carry 400 ton of cement from Pandu Port near Guwahati to Dhubri/Hatsingimari covering a distance of 255 kilometers. With this, IWAI will be initiating regular cargo movement through inland waterways on national waterways under the Sagarmala programme.
This is expected to open new business and employment opportunities in the North-East through inland waterways.
An official statement from the Inland Waterways Authority of India said transportation of cargo through NW 2 from Pandu to Dhubri will help save 150,000 tonne km of road transportation per trip and 300 Km of road travel while reducing the logistics costs.
One Horse Power can move 150 Kg on road and 500 Kg on rail, it can move 4000 Kg on waterways. Further, while one litre fuel can move 24 ton per km on road and 85 ton per km on rails, the same amount of fuel can move 105 ton per km on waterways. In addition, the infrastructural development for Inland Water Transport (IWT) requires minimal land as compared to road and rail, it said.
"IWAI will charge only Rs 318 per ton as waterway transportation charges from Pandu to Dhubri/Hatsingimari to enthuse entrepreneurs and logistic operators to shift to the cost effective and eco-friendly mode of transportation that also reduces congestion on road. IWAI has been working closely with major cement firms like Dalmia, Star and Amrit and appreciates interest shown by them in cargo movement through waterways. Efforts are on to get other cargo owners to shift their transportation to waterways as this can be a key enabler for reduction of logistics cost and open up more business & employment opportunities," said the statement.
Assam chief minister Sarbananda Sonowal will also attend the flag off function.
The statement said the ministry of shipping has been making focused efforts to connect the Northeast region to Kolkata, Haldia and Mongla and Chittagong ports in Bangladesh to provide efficient logistics in the region which has depended on road and and rail for transport.
The IWAi has developed Pandu port as a multi-modal modern inland water transport terminal, equipped with cargo handling facilities, transit sheds, and appropriate open space facilities/hard stands.
Night navigational facilities comprising of solar operated lights on beacon have been provided and maintained between Bangladesh Border and Silghat (440km), which is the last Port of Call on the Protocol route connecting Assam with Kolkata/ Haldia through Bangladesh.
"Differential Global Positioning System (DGPS) stations have been provided at Dhubri, Jogighopa, Biswanthghat and Dibrugarh for safe navigation of vessels with electronic charts. Floating terminal facilities have been provided at 12 important identified locations–Hatsingimari, Dhubri, Jogighopa, Pandu, Tezpur, Silghat, Biswanathghat, Neamati, Sengajan, Bogibil, Dibrugarh/Oakland and Oriumghat which will be increased as per location needs, it said.
Of the 106 new National Waterways that were notified in April 2016, under the National Waterways Act, 2016, 19 are in the Northeast on the Brahmaputra, Barak and it's tributaries such as NW-16 (river Barak), NW-95 (river Subansiri), NW-39 (river Ganol), NW-93 (river Simsang), NW-101 (river Tizu and Zungki), NW-31 (Dhansiri), NW-62 (river Lohit), NW-106 (river Umngot), NW-18 (river Beki), among others.
__________________________________________