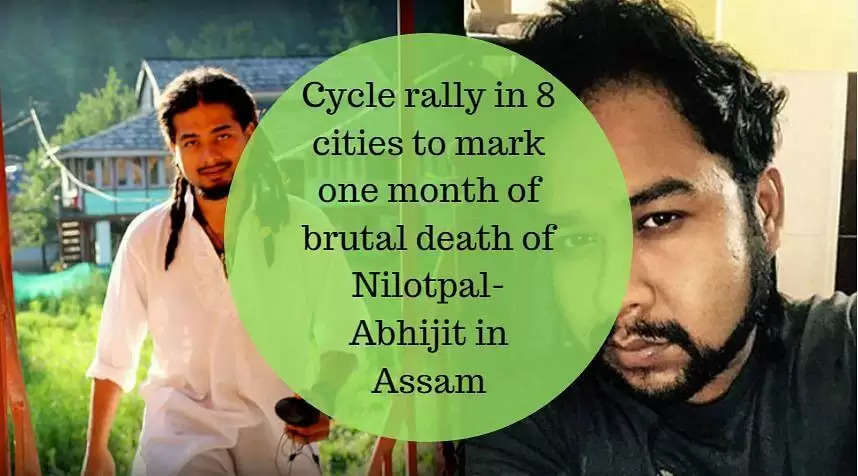 8th July, 2018 is the month of the horrific killing of Nilotpal Das and Abhijit Nath at Dokmoka in Karbi Anglong. To mark the occasion, A Cyclothan is being organized in various parts of India including Guwahati, Delhi, Bengaluru, Goa, Shillong, Chandubi, Mumbai and in Russia to stage protest against the inhuman act of lynching.

In a Press Conference organized in this regard by Justice for Nilotpal and Abhijit Team on July 7 at "By the way", in Guwahati, Hatigarh, Chariali, Kaustav Chaudhury, coordinator of the group informed that to commemorate one month of the incident the day will be observed in remembrance and to stay together to put pressure for justice. Chaudhury informed that the day would start with Cycle rally in 8 cities followed by Peace Jam organized by Hope for Humanities at Shilpagram. Jubee Baruwa who runs the popular Guwahati Cyclothon, Cycle Rally Carnival in Guwahati informed that at the same time 8 cities will participate in the Cyclothon in the memory of Nilotpal and Abhijit. She also informed that Guwahati Edition Cyclothon will start at 7.30 in the morning on 8th July, 2018 at Digholipukhuri and around 200 cyclist will participate in the rally upto Shilpagram.

Hope For Humanity, is a non-profit organization with the primary motive to spread awareness, create discussions and deliberations and find solutions to problems to trouble us. Vir, informed that Peace Jam will aim at creating awareness against superstition and to promote peace.  The day long programe at Shilpagram will have art, doodle art, drama, motivational speech apart from musical act expressing  message of love.  Well known band Imphal Talkies of Manipur, Moa & Abiogenesis of Nagaland, band from KarbiAnglong and many other will give tribute to the departed soul and send a message of hope and peace.

Shyamkanu Mahanta, well known Social Entrepreneur and Advisor of the Justice for Nilotpal Abhijit group informed this is a Nido Tania movement. In 2013,  an Arunachali boy Nido Tania was killed in Delhi. After the event, a mass scale movement by NE people made a big impact in Delhi and a new law was framed, substantial awareness against such incident was created. Mahanta informed that the group is working with prominent lawyers as well as the governmnet to ensure that justice is delivered unlike in the case of Jhankar Saikia.

Mahanta also informed that the progress has been good so far with support from State Govt and the team met Hon'ble CM and Hon'ble Law Minister of Assam for fast track court, trial in a neutral place and a Special Public Prosecutor to fight the case and a strong SIT to monitor the case. He said the governmnet has been supportive and within 90 days charge sheet is going to be filed.