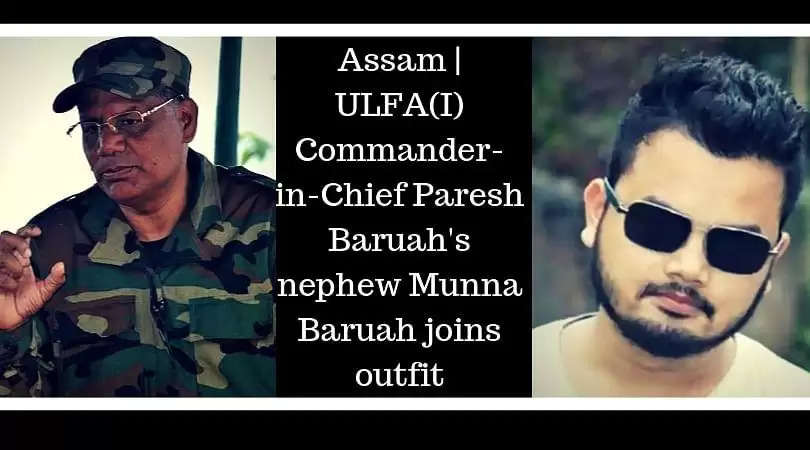 ULFA (independent) commander-in-chief Paresh Baruah's nephew who was said to be missing has joined the insurgent outfit said Assam police.

22-year-old, Munna Baruah, son of Paresh Baruah's elder brother Bimal, also a trainee at the Digboi oil refinery, had been missing for over a week, according to police.

"A missing persons complaint was filed at the Digboi police station on November 15," Tinsukia's superintendent of police Mugdhajyoti Mahanta said on Sunday.

"We have been able to confirm that he has joined ULFA(I). He left for Myanmar through Mon in Nagaland," he added.

Pallab Bhattacharyya, Director General of Police, Special Branch, the state's intelligence setup, warned that the push to the Citizenship (Amendment) Bill, which would pave the way for citizenship to minorities from Afghanistan, Pakistan and Bangladesh who have come to India for fear of persecution, has given a "fresh lease of life" to ULFA.

He said it is a "big contributing factor for the dissatisfaction among Assamese" and "we should be very careful in going ahead with it."

Bhattacharya said as many as 11 persons have joined the outfit since September 2018 while another 11 have been brought back by the Assam Police.

Earlier, in May, a 16-year-old girl, who was a higher secondary school student and a kick-boxer, had gone missing in Tinsukia. "She also joined ULFA(I)," Mahanta said, adding over the last three years, as many as 22 persons have been brought back from the jungles and are now undergoing counselling in Tinsukia.

Another police officer said recent recruitment into the outfit from lower Assam is worrisome.

In September, three boys had left for the ULFA (I) camps from Udalguri district in Bodo Territorial Administrative Districts. At least two were Class 10 dropouts, Udalguri superintendent of police Rajveer said.

On the reasons for the growing recruitment, Bhattacharya said that "lack of employment and education is one factor," but added that the "Citizenship (Amendment) Bill has given a fresh lease of life to ULFA(I) recruitment"..

Brahmaputra Valley has seen widespread protests over the Bill.

"I have been getting inputs how there is dissatisfaction among all sections of the Brahmaputra valley over the Bill. The 1985 Assam Accord was supported by all sections. The feeling among people is that we have taken extra burden of foreigners till 1971," Bhattacharyya said. "Through the Bill, you are again forcing the people to take burden," he said.\

He also blamed the media and social media, too. "The media coverage on the contentious issue of the Bill on vernacular channels is giving support to views of organizations like ULFA(I)," he said adding how channels would invite Paresh Baruah to these discussions over phone, knowing well he is part of a banned group.

Assam police had requested the centre agencies on Saturday to block a Youtube video where a young rapper is inciting people to take up arms against "Bangladeshis". Over 73,000 views has been amassed by the video since it was uploaded on November 8.