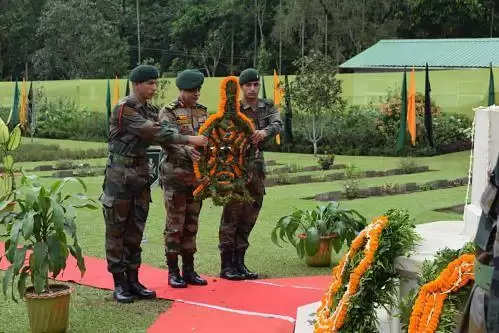 Tributes were paid on Sunday to commemorate the death of the brave soldiers and martyrs from India and abroad to pay homage to who laid down their lives during the Second World War at Digboi War Cemetery on November 10.

The event is organised every year on the Second Sunday of November under the aegis of the Commonwealth War Graves Commission (CWGC). Traditionally, the event is co-jointly organised by Troops of Indian Army along with Indian Oil Corporation Limited and CWGC.

General Officer Commanding, Dinjan Military Station was chief guest of the ceremony. The General Officer laid wreath and addressed the august gathering. He also enumerated the various sacrifices by the brave heart soldiers during the Second World War which also included a large number of Indian Soldiers.

Some of the Fiercest battles of Second World War were fought during the Burmese campaign. During these battles those who achieved Martyrdom were cremated at the Digboi Cemetery.

The War Cemetery has 200 Graves including 50 brave soldiers from India. The troops of Indian Army organised a Guard of Honour to commemorate the occasion.